We Say Enough To The Government Of Thieves In Imo State 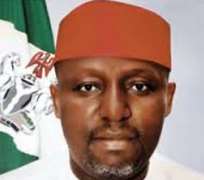 It was normal news report in a popular Owerri based newspaper; the type we are used to seeing regularly, but would, most likely, merely glance through before turning our attention to more 'important' matters. But when I saw a particular report, confined to a small corner of the newspaper, something about it spoke a very clear message to my heart of what will happen in the Governorship election in Imo State. The newspaper has the heading, “Imo Speaker loses Senatorial election,” another headline said “ Rochas Okorocha furious over defeat”

Unfortunately, ours is a State where some fellows, with an exaggerated notion of their smartness, have mastered the very grievous and self-demeaning art of wasting precious time and resources that could have been deployed to productive use on some meaningless exercises. Or else, how can one possibly explain the stubborn insistence of the Imo Speaker through his Senior Special Assistant on Media Mr Emeka Ahaneku to spend millions of naira on the Speaker's Image Laundering Project thinking he will win the Okigwe Senate seat when even from the beginning , it was all too clear to every Imolite, that Uwajumogu will lose and the whole image laundering will not only be wasteful, but capable of making the Speaker look foolish and grossly diminished before the outside world.

In this internet age when the latest news from Imo and Nigeria could immediately be read in USA, London, Egypt, Mexico and anywhere in the world what possibly could Emeka Ahaneku be wasting his time telling us about Uwajumogu that we do not already know? Due to Uwajumogu's incompetence as Speaker of Imo House of Assembly ,Governor Rochas Okorocha wrapped the entire Imo State up, confidently put it away in one of the folds of his wife's wrapper and retired to an oxygen bed for a long, four years sleep. And the heavens did not fall! Imolites know this and did not require the effort of Ahanaku and his gaggle of image launderers to make up its mind about not voting for Uwajumogu to represent them in the Senate. Imo is bare before the whole wide world!

Like it happened to Imo Speaker so will it happen to Rochas Okorocha. The fate of millions of hungry looking, mal-nourished and oppressed Imolites will be decided soon as Imo prepares to go to the poll in April 11, 2015. It is clear that for Imo to be better again we must kick out the fat-cat Governor of Imo State Chief Rochas Okorocha . Okorocha has grown fat and sleek by preying on the hardship he imposed on the masses. In an immoral manner, this wicked, godless, notorious and dangerous fat-cat has looted Imo treasury dry and arrogantly displays the loot on AIT and Channels TV before the eyes of the very people he has stolen from.

This fat-cat, who sometime ago was owing banks in Nigeria here and there has overnight mutated to become stinking rich and stands before the very people he has skinned to become affluent and boast of his prosperity. He and his thieving cabals even have the guts to call us never do wells and tell us that we were born to be “hewers of wood and carriers of water” and that it is criminal for us Imo youths to aspire to get a civil service job in Imo. After sacking 10,000 Imo civil servants he turned round to offer Imo youths casual labour. Casual labour is it not a crime against humanity?

This man has grown so desperate that he can kill to come back to power in April 11th . He went after all those that told him to stop looting Imo . He tried to crush them all. He has found out that the heavy inducement he doles out to newspapers and television to advertise fake projects yielded dwindling results so he is terribly mad with those who exposed his lies and impunity. His desperation is getting deadly by the day. He is going about threatening, brutalizing and persecuting his opponents and all those that disapprove of his tenure.

Yes, Okorocha , like the pigs in “Animal Farm” joined the club of “Consumers” who feed fat on the toil and sweat of the producers. He is sitting on top of Mount Olympus with his fellow oppressors to arrogantly look Imolites to the face and tell them to go to hell. But Imolites will soon prove to them that If you buy suya, you must be given pepper.

Because he suddenly found himself in power, he allowed himself to be eaten up by power. He deemed Imo state treasury as free fund to loot, buy and bribe newspaper houses , editors and TV stations to write and broadcast flattering reports about himself. He deemed himself as the best thing that had happened to Imo State and urged the hordes of sycophants he recruited into his government to sing his praises. For four years now he has being on sponsoring spree; sponsoring awards, sponsoring lectures, sponsoring public shows and sponsoring articles and features that were all devoted to celebrating himself, telling us lies upon lies while he and his cronies made a huge feast of the resources of Imo State.

They have looted over 175 billion Naira LGA funds. They refused to give us democracy at the LGA levels so what moral right do they have to ask us to vote for them again? There is only one option for Imolites if we want to regain control of our sanity and leave a brighter future for our children and generation yet unborn. The option is to kick Rochas out. We have long passed the era of negotiation. We have reached the point of no return. . Imolites cannot become blind and continue to be led by a Bartimaeus. We do not know where we will head to if Bartimaeus wins again in 2015. Only Heaven knows. Dr Sam Mbakwe ruled Imo very well without a president of his party at the center. It can be done in Imo. We say NO to this government of thieves.