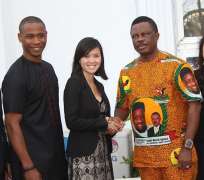 Five days to the first anniversary of his administration, governor of Anambra State, Chief Willie Obiano has continued to attract investments into the state with the signing of a $1.5 million dollars agreement with an American healthcare firm, Rise Health Corporation, USA.

Under this agreement, Rise Health Corporation will embark on a historic healthcare reengineering project in Anambra State that will usher in a new phase of excellent Medicare in the State. The first phase of the project involves two General Hospitals in the State, one in Ossomala in Ogbaru Local government area and the other in Orumba, Orumba Local Government.

Speaking at the agreement signing ceremony in the Governor's Lodge, Amawbia, Governor Obiano reiterated his administration's resolve to turn Anambra State into a model for healthcare delivery in Africa.

According to him, his administration is attacking the challenge of delivering a comprehensive healthcare solution in three major ways – development of medical infrastructure, assurance of the comfort of patients and finally the training and retraining of health workers along with improved conditions of service.

Said he; “We have 37 General hospitals in Anambra State. They are all in comatose at the moment. However, we have selected three General Hospitals across the state, one from each senatorial zone to show our imprimatur. We have started with the General Hospital in Onitsha. When we are done with the current work that is going on there, Onitsha General Hospital will be one of the best in Africa. It will also have a landing pad for air ambulance. When we finish with Onitsha, we will move to Ekwulobia and Enugu Ukwu,” he explained.

Governor Obiano also revealed that his administration had approved about N800 million for the purchase of basic medical items for the 37 general hospitals across the state, saying, “we have done very well with the Mission Hospitals. It is a project started by my predecessor that I have continued and as you are aware, this year alone, we have given them close to N800 million to improve on our health facility.”

The governor also revealed that his administration has concluded plans to launch six floating ambulances in order to open up medical access to the riverine communities. “We will also launch 15 flying boats that will assist teachers and health workers in these areas to move freely. We are trying to provide the best healthcare to our people,” he enthused.

Earlier in his opening remarks, the President of Rise Global Health Initiative, the parent company of Rise Health Corporation, USA, Dr. Emeka Okeke had disclosed that after operating an outfit known as the Rise Clinic in Adazi-Ani, in Anaocha Local Government Area of Anambra State for four years, the Rise Group decided to partner with the state government to expand the scope of its operations to other senatorial districts in the state.

Dr. Okeke explained that the group's imminent expansion would grant access to more people who are in need of quality healthcare as well as offer employment opportunities among others.

Also tracing the history of the intervention of Rise Global Health Initiative in the health sector of Anambra State, the Vice President of Rise Health Corporation, USA, Dr. Hien Tran recalled that when the company started in 2012, its objective was to identify communities that are able to build independent health systems on their own and lend them support.

“We wanted to find communities that are willing to invest in themselves. And that's how the partnership between Godwin & Patricia Okeke Foundation and RiseGlobal Health Initiative the parent group of Rise Health Corporation began. Since then we have been able to build the Rise Clinic Nigeria, a comprehensive healthcare center that provides a comprehensive healthcare to communities as well as support to primary health centres in Adazi-Ani,” she recalled.

According to her, Rise Health Corporation had formed a special purpose vehicle that would grow the Adazi-Ani model of comprehensive healthcare center in the three senatorial districts of the state, pointing out that this week, “our focus is really on engaging the community and creating awareness in this reengineering project because it is the communities that will be the drivers of the project. So, what this special purpose vehicle will be doing is not to create something new but to scale up what we have already accomplished in Adazi-Ani.”

Also speaking at the agreement signing, the Chairman of Anambra State Investment Promotion and Protection Agency (ANSIPPA), Igwe Cyril Enweze observed that the project would focus on the formation of a health alliance and the formation of a state-wide emergency network and other emergency support systems.

Throwing more light on the likely benefits of the project, Igwe Enweze explained that “the reengineering of two state owned general hospitals in each coordinating center will improve Anambra State health system and emergency response capabilities and create jobs for Ndi Anambra as well as enhance skills acquisition by improving the quality and productivity of the local workforce.”

Igwe Enweze also expressed optimism that the project would play a catalytic role by assisting in the leveraging of resources from the federal government and more importantly from the donor agencies in order to improve Anambra's health system.

The equity structure is 40 % for the state and 60% for Rise Health Corporation.