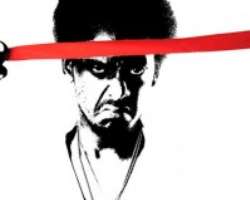 The name Makmende was popular among Kenyan children back in the 1990s. It was used to describe any child who believed he could challenge anyone to a fight (especially after just watching an action film). The legend disappeared with time, only to be reintroduced in a music video – this time with a face to match the name. The musical trio Just A Band has released a video for the song Ha-he, and has centred it around Makmende.

The video has achieved instant popularity, with over 50,000 Youtube views (on the official upload alone) within two weeks of its release. The video has a seventies feel to it, and immediately brings back memories of Shaft. Makmende is also a mean-faced and fearless fighter who deals with his enemies ruthlessly, in this funny but oddly-violent video.

What has made Makmende even more popular was jokes about him on Facebook and Twitter, quite similar to the Chuck Norris or Jack Bauer jokes that have been making the rounds online:

- Makmende bit a mosquito and it died of malaria

- Apparently they changed the rules of Scrabble… and if you spell Makmende, you win…forever

- Makmende beat the sun in a staring contest

- When Makmende needs a massage he gets Jack Bauer to torture him.

The list is endless. And it all began with the aptly named Just A Band, made up of Jim Chuchu, Bill “Blinky” Sellanga, and Dan Wambua, three guys who met in university. They have now released two albums, with a dance/funk/house sound that would remind you of Gorillaz or Daft Punk. With two albums already released (Scratch To Reveal and 82), Just A Band is pretty much a DIY group making its own music, videos, and album sleeves, doing an impressive job despite tiny budgets. The problem that the group faces is the lack of structure in the Kenyan music industry, which is also a familiar setback in most African countries.

Makmende's reintroduction into the Kenyan social scene has now become a viral Internet phenomenon, and has had the Just A Band trio becoming the centre of attraction in the East African country, with interviews on primetime TV news, while also attracting the attention of the international media. This is a case of talent and creativity mixed with determination, and should serve as a form of inspiration to other young Africans.