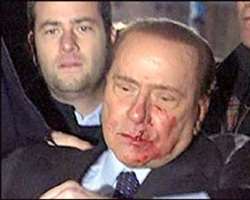 Prophet TB Joshua of The Synagogue, Church of All Nations, on Sunday, the 13th of December 2009, during live service asked his members to pray for the president of one great nation.

During an appearance in Milan on Sunday to rally support in advance of March elections, the Italian Prime Minister Silvio Berlusconi was hit in the face by a statuette, allegedly hurled by a man in the crowd. The missile fractured his nose, broke two of his teeth and injured his lip. Berlusconi, who was hit in the face and bleeding profusely from the mouth, was rushed into a car and driven away to be examined at a hospital.

Media reports identified the alleged attacker as Massimo Tartaglia, a 42 year old man. Tartaglia allegedly approached Berlusconi as the 73-year-old prime minister was leaving a rally of his People of Freedom (PdL) party. Berlusconi was apparently hit in the face by a miniature replica of the Milan Cathedral.

The attacker with a history of mental illness has been charged with throwing the souvenir. After a night of questioning at a police barracks, the man was moved to the San Vittore prison in Milan, the ANSA news agency said. Police have identified him as Massimo Tartaglia.

The Italian Prime Minister, Silvio Berlusconi stayed in hospital for observation overnight and is set to remain there 'til Wednesday according to his doctors.