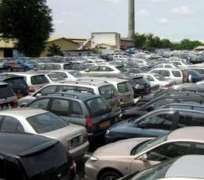 The implementation of the 35 per cent import levy on used cars will now begin on June 30, 2015 as the Federal Government has once again shifted the commencement date by two months.

In a move to encourage local assembling of vehicles, the government had in September 2013 raised the import tariff on fully-built cars and used vehicles from 22 per cent to 70 per cent made up of 35 per cent duty and 35 per cent levy.

The first phase of the policy, involving the payment of the 35 per cent duty came into effect in February 2014.

The Director-General, National Automotive Council, Mr. Aminu Jalal, informed our correspondent through a text message on Monday that a circular had been issued by the Federal Ministry of Finance deferring the implementation of the levy to June 30. He did not give any reason for the postponement.

When the implementation of the second phase was first moved from July 1, 2014 to January 1, 2015, the government had said that it was to enable local vehicle assembly plants to ramp up production in order to meet the nation's demand for brand new vehicles.

When it was last month deferred again to April 30, 2015, the Federal Government said through NAC, an agency of the Federal Ministry of Industry, Trade and Investment, that the postponement was due to the delay in establishing a vehicle finance scheme.

Jalal had said, 'The arrangement for the establishment of the affordable vehicle finance scheme suffered a delay of about four months due to the Ebola Virus Disease. The staff of the collaborating bank, Wesbank of South Africa, delayed their planned trip to Nigeria to set up operations from September 2014 to January 2015.

'Hence, the new date for the start of operations of the financing scheme is April 2014. Accordingly, the Minister of Finance has been asked to extend the levy deferment on used cars to April 30, 2015.'

Nigeria imports about 400,000 units of vehicles annually, with about 300,000 being second-hand. As a result of the devaluation of the naira and the subsequent rise in the cost of buying used vehicles and clearing them at the nation's seaports, auto dealers at the Berger Yard Auto Market in Lagos have reduced the volume of importation by over 50 per cent.

Port and Terminal Multi Services Limited, the largest terminal for vehicle imports, has recorded a 61 per cent drop in the volume of imported vehicles. The terminal had in January 2014 handled 16,000 units of vehicles, while only 6,200 passed through it last month.

Efforts to get a response from the Special Adviser to the Minister of Finance on Media, Mr. Paul Nwabuikwu, proved abortive as he neither picked his calls nor respond to a text message sent to his mobile telephone. - Punch.