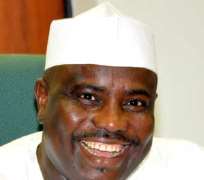 The House of Representatives has rejected the $65 benchmark proposed in the 2015 budget by the executive.

It said the 2015 proposed budget was based on certain policy thrusts, instruments and assumptions that were flawed and must be 'critically' addressed.

From all indications, the House will stick to a $50 benchmark or something slightly above that figure.

The Green Chamber described the benchmark for 2015 budget as 'unrealistic and problematic,' saying 'the budget cannot fly.'

It has also faulted another parameter in the budget which is the 2.278 million barrels per day crude oil production estimate in the Medium Term Expenditure Framework (MTEF), saying it does not also reflect current realities.

This disclosure comes even as a 17-member special committee meets with the Minister of Finance, Dr. Ngozi Okonjo- Iweala, on Thursday.

This disclosure on the position of the House was made by the Chairman, National Assembly Budget and Research Office (NABRO), Hon. Michael Opeyemi Bamidele. 'Definitely, this is a wrong assumption. It's a problem and part of the reasons the budget cannot fly.

'Going by what is happening in the international crude oil market, it's wrong and unrealistic for the executive arm of government to have proposed a $65 per barrel benchmark,' he stated.