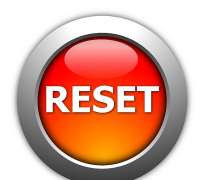 Certain things are a given in Nigeria. One, prices never go down. Two, there are no checks and balances. Three, each time we press "reset" on a government, not only do we start all over (halted projects, fresh policies, new wave of corruption), the crooks get smarter, befriend the newcomer and again become immune till that President learns the ropes, and recognises them for what they are: crooks parading as well-intentioned elites.

It is common knowledge that prices never go down in Nigeria; and that when they do, they are never as they seem. A rather recent example is the "speculation" that petrol pumps have again been tampered with so that we were better off when PMS was N97! The price may have reduced, but so has the (unit) quantity. Were we not better off?

You see, the problem with Nigeria is never the Presidency, per se; it is with the reset button, and it is threefold.

Two. The kò-kàn-mí. The unscathed. They do not profit from mayhem per se, but they are not bothered by it. Their sustenance is secure; hell can break loose if it may. They see the evil, they know the perpetrators, but they look the one way, so long they are reimbursed for their collateral damage. Most members of the Chambers are in this group; plus the advisers. They are the reason Jona (innocently) tells the world that Lagos has constant power supply.

Three. The Mèkúnù. My people. Gullible since time immemorial, and ever so. They are easily manipulated, easily bought over, easily silenced. They are highly suggestible, forget (and forgive) easily, and are themselves easily forgotten, but not forgiven. They are the puns, and the elites know this. They are the reason the same Buhari who was no good in 2003, 2007 and 2011, is suddenly the Messiah. Get in touch with the right people, and the Mèkúnù will willingly (and willfully) press the Reset Button for you. They can even vote Shekau for president, so long they are rubbed the right way, as they are now...

When in 1966 Kaduna Nzeogwu, and co, struck, it was mandated and focused, until Ironsi sneaked in, purportedly to implement the 1st-Coup Agenda: putting the masses before the elites and their selfish interests, much to the chagrin of the latter.

Six months later, Gowon toppled him, and the elites were at peace for nine years until Murtala came up and worked for the masses with his popular policies and decisiveness; his neutral (on Angola: anti-US, pro-Soviet), Nigeria-first foreign policy; his "Fellow Nigerians," and "with immediate effect."

Six months (and two weeks) later, the elites got their wish when Dimka assassinated one of the most heroic Heads Nigeria ever had. He had stepped on toes with his fight against corruption, inflation, and unregulated state governments. He was in the way of the elite's livelihood, sacking some 10 000 public servants for old age, ill health, incompetence, and malpractice/corruption; and even demobilising some 100 000 troops.

(Un)Fortunately, Obasanjo was not as aggressive, and when he recognised Shagari, the elites could again rejoice; until Buhari spoiled the party and again put masses first, as much as his proclivities allowed. So that Babangida, to his eternal regret, truncated the regime to the relief of our parasitic elites, and their foreign potentiators.

Then came Shonekan, Abacha, Abdulsalam, Obasanjo (again), and Yar'adua; none of them capable of shutting our elites up so much that they will campaign for the opposition this much, none of them crushing toes, amputating legs, and going for the jugular.

They always came promising and proclaiming change, change that we ne'er saw (as long as we looked out for better, and not worse). Babangida, for example, promised to "bring to an end the human rights abuses perpetuated by Buhari's government, and to hand over power to a civilian government by 1990. Eventually, he perpetuated one of the worst human right abuses and lots of unresolved political assassinations"; remember Dele Giwa?

And they are at it again! Here again are our ears being subdued with the familiar propaganda, Change!, that we honestly have had enough of, and are better off without, as Nigeria herself says:

Fellow Nigerians, once again we have a President that is out for the elites' blood. Once again, the Mèkúnú shall rule, not by lip service as we had before Jonathan's regime, but by actionable reforms. Once again, we shall reclaim our land, if we can only be patient with this particular era of sixes.

Yes, six years into Jonathan's Presidency, the same mindset that displaced Ironsi, Murtala, and the young Buhari is yet at work. They pretend to be our friends, they bring us a Buhari that has finally aligned himself with them (and hope we cannot tell the difference), they act like monkey to catch same; anything to protect their interests and secure their bloodlines, even, and especially, at our Mèkúnù expense.

But we ain't no monkeys, not anymore, not this time.

And so they come out to play concerned citizens, to play the same Mèkúnù they detest so much that they'd rather we ate from the gutters and saw N5000 notes we must never have, to play puppeteer to Buhari for whom they keep disbursing their ill-gotten wealth in hopes of recouping in Buhari's naïve tenure... Shall we allow that?

Well, not this time. This time, we shall vote for Jonathan. He may be slow, but he is working. He may be naive and trusting, but he is innocent, and has finally seen his faults as well as his fake friends; Buhari's wind has blown and he has seen the rats in his cabinet. He may not have silenced BH, but he will this year, once his term is secure and the saboteurs can no longer threaten to rally about the other one. Yes, he made mistakes; who doesn't? you? me? the other one?

No one is perfect!

He is Murtala, new and improved: Rather than lay off 10 000 workers to save expenses, his IPPIS has silenced 50 000 ghost workers. Rather than demobilise 100 000 troops because of BH's intransigence, he has recruited more – and the (corrupt) Generals are best dealt with in his second term, Insha Allah. Rather than hunt his political opponents with EFCC or turn Baga into another Odi, he is following due process: slow but sure, fair and democratic, and constitutional.

He deserves a second term.
He needs our votes.
Let's give him.

Disclaimer: "The views/contents expressed in this article are the sole responsibility of Ayokunle Ayk Fowosire and do not necessarily reflect those of The Nigerian Voice. The Nigerian Voice will not be responsible or liable for any inaccurate or incorrect statements contained in this article."
Articles by Ayokunle Ayk Fowosire
21-12-2015  Why Won't They Fail?10-10-2015  Before The New Tariff6-4-2015  Why Not Change!28-3-2015  As We Vote Today27-3-2015  For The Love Of CountryMore...