Who Doctored A Cambridge University Response To Hausa Language Exam in 1961? 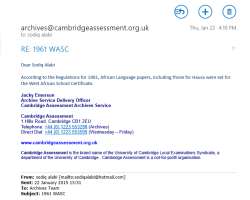 the 1961 West Africa School Certificate, WASC, is currently in

circulation.
Alabi in an email to Pointblanknews.com said the original response he got

1961 WASC exams.
He said another version claiming that Hausa Language was not offered in

the 1961 WASC exams “grossly misrepresents my exchange with Cambridge.”

and indeed apologize to Mr. Alabi if we have been misled into publishing

the doctored document
The post Who Doctored A Cambridge University Response To Hausa Language Exam in 1961? appeared first on Pointblank News .