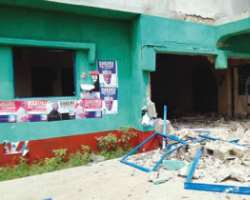 Political violence raged in parts of the country on Sunday with an explosion rocking the All Progressives Congress secretariat in Abam Ama, Okrika Local Government Area of Rivers State.

Just as the news of the explosion hit Port Harcourt, another round of violence was recorded in Rumueme, Obio/Akpor LGA where four APC members were machetted by persons believed to be political thugs.

The Rivers incidents came less than 24 hours after two campaign buses   of President Goodluck were set ablaze by some youths at the Mangu Street junction in the Jos North LGA of Plateau State.

The PUNCH learnt that unidentified persons threw dynamite into   the three-storey APC secretariat at about 3.14am which caused extensive damage to the ground floor.

The APC Chairman in the LGA, Mr. Christian Asifamak, who narrated the incident,   said that   his office was the worst hit as the entire wall was pulled down by the impact of the explosion.

'In the early hours of   Sunday, some unknown group of persons threw dynamite into our party secretariat, he explained, lamenting that the   attack was   'a deliberate provocation by our opponents, the Peoples Democratic Party, to draw the APC into a battle that could destabilise our LGA.'

He warned that   'the APC in Okrika would not allow Okrika to become a hotbed of crises as the PDP would wish.'

Asifamak claimed that   the PDP had resorted to violence because of its rejection by the Okrika for failing to bring     development to their LGA.

He added, 'Till now the East-West Road through which we access our community has been left abandoned by a PDP-led Federal Government while Governor Chibuike Amaechi who is not an Okrika man built a ring road in Okrika and also rebuilt the portion of the federal road that links the LGA to the Port Harcourt refinery.

'We however wish to warn our brothers in the PDP to remember that the land of Okrika has been known to defend itself and its people against aggression and that any Okrika person who brings crisis to the land answers for it.'

Also, the governorship candidate of the APC in the state, Dr. Dakuku Peterside, who was in the community to assess the extent of the damage,   expressed worry that the PDP   and its supporters had initiated a pattern of attacks on the people of the state.

He said, 'The Police and other security agencies should tackle the excesses of the opposition party. This development is very sad and it is unfortunate that some persons in the society have decided to choose this path.

'If you have noticed, there has been a pattern of violence lately. On   January 6, when we had our presidential rally at the Adokiye Amesiemeka Stadium, you would have noted that some of our people who were coming from Abonnema, Degema and Asari-Toru axis were attacked around Sa-Ama junction.

'We have raised these issues with the Commissioner of Police; we have raised it with the security agencies. Not much has been done after then. Aside from that, you must also have observed a trend. A few days ago, they were in Abonnema to campaign; a faction of PDP fought with another faction of the PDP and two persons were confirmed dead.'

'The command is aware of the incident (in Okrika). Information at my disposal is sketchy. However, investigation has commenced,' Ahmad said.

In Rumueme,   three out of the four injured APC members were rushed to the Kesley Harrison Hospital in Port Harcourt for treatment.

The APC leader in Obio/Akpor LGA and a House of Representatives candidate, Chief Tony Okocha,   said that a Warri chief   who was in Rumueme for the   APC rally on Sunday,   was machetted several times.

Okocha, who   personally drove the three injured person to the hospital, lamented that the whereabouts of the chief was unknown.

He warned   in a telephone interview with one of our correspondents that members of the APC were almost exhausting their patience over the continued attack on them by persons believed to be PDP thugs.

Okocha urged the state Police command to invite the leaders of the political parties to a meeting and warn them against violence. Punc