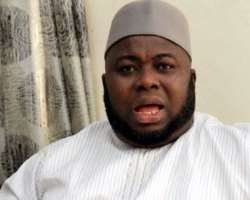 The leader of the Niger Delta Peoples Volunteer Force (NDPVF), Alhaji Asari-Dokubo, has said the Movement for the Emancipation of Niger Delta (MEND) is a faceless organisation which no longer existed as far as the struggle for people's emancipation in the region is concerned.Speaking against the background of the controversial statement issued last week by MEND endorsing the candidacy of the presidential candidate of the All Progressives Congress (APC), General Muhammadu Buhari (rtd), the former militant leader described the acronym, MEND, as a pseudonym being used by the imprisoned Henry Okah to deceive ignorant persons.Asari Dokubo also said the name, Gbomo Jomo, who always signed statements on behalf of MEND, was not known to belong to any nationality in the Niger Delta region.'Our people say birds of a same feather flock together, it is not strange that this organisation is endorsing  Buhari. First, I have always maintained that there is nothing like MEND.'When I was in prison, the organisation I lead, NDPVF, the NDPSF and other organisations came together to stop arrest and they formed a faceless organisation, some guys, including Henry Okah, were sent to me in Kuje prison for us to get a name and my opinion on what they were going to do, I accepted though majority of members of NDPV resisted it, I told them that we should be faceless and so they formed MEND.'General Taminu was supposed to be the head, but it does not exist, Alaibe was supposed to be secretary, it does not exist. Gbomo Jomo, which is not a name known to any nationality in the Niger Delta does not exist,' he said.On the allegation made by President Goodluck Jonathan that Henry Okah planned to assassinate him, Dokubo said: 'What the president said is belated. The president had known since 2007 that Henry Okah wanted to kill him. For saying it, it is the fault of Ijaw leaders including Chief E.K Clark who have been sweeping this thing, it under the carpet. And one day, the debris under the carpet will become too much that the carpet will be undulated.'Now, it is undulated, the stench is coming out and the President could no longer hold it. He has now come out to say Henry Okah wanted to assassinate him which was true. Henry even said the President and myself are not Ijaw people.He debunked media reports credited to him that he was going to invade Yoruba land, saying 'There was no such statement. Everybody knows that when I make a statement, I own up to it. There is no such thing. I never made it. You know, a lot of times, they ascribe a lot of things to me.' Thisday