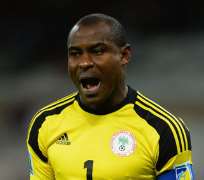 Supper Eagles goalkeeper, Vincent Enyeama has been selected as the best shot stopper in Ligue 1 for 2014 by prestigious French Newspaper, L'Equipe.

But in Turkey, another Nigerian, Shola Ameobi has decided to quit second-division side Gaziantep Buyuksehir Belediyespor.

The 32-year-old Enyeama was selected as the league's best goalkeeper for 2014 despite Lille's stuttering start to the 2014-15 season that sees them languishing in place in 13th place in the 20-team standings.

Enyeama has played in every minute of Lille's 56 league matches since he returned from his loan spell at Israeli club, Maccabi Tel Aviv in 2013.

This is the second successive year that Enyeama has been selected as Ligue's 1's most outstanding goalkeeping talent by L'Equipe.

'From the first day I saw Vincent (Enyeama), I knew he was a star. Having worked with him, I can say for a fact that he's the best in Africa and one of the best in the world,' Shorunmu told supersport.com. yesterday.

Only three other players selected from last year, Gregory Van der Wiel, Maxwell and Zlatan Ibrahimovic, retained their spots in the prestigious list this year.

The Nigeria international penned a one-year deal with the club, after his 14-year stint with Premier League side Newcastle, came to an end.

Gaziantep announced during the week, that Ameobi who scored four goals in 11 appearances for them, has asked them to terminate his contract, so he could return to England for family reasons.

The striker, who featured for Nigeria at the 2014 World Cup, decided to move to Turkey, despite interest from America and England. Agency report