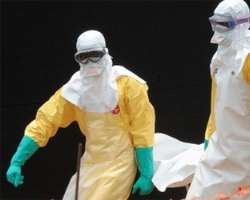 Accra, 2 January 2015 – Anthony Banbury, Head of the United Nations Mission for Ebola Emergency Response (UNMEER), gave a final review of progress in the fight against Ebola today as he prepares to hand over the role to his successor, Ismail Ould Cheikh Ahmed of Mauritania on Saturday.

“It's important to remember where we were when we started,” Banbury told journalists during a press conference in Accra. “At the time, there were predictions of up to 1.4 million cases of Ebola by the start of the year...Here we are in January and we have a total of around 20,000 cases instead of 1.4 million. That's 1.4% of what was being projected as a possibility by credible scientists back in September.”

According to the latest World Health Organization report, there are 20,206 confirmed, probable or suspected cases of Ebola and 7,905 reported deaths.

“We are engaged in a big battle with this disease,” he said. “It's an insidious, invasive disease that attacks people through acts of caring and kindness...It's going to be extremely hard for us to bring it down to zero but that is what we will do. That is the only acceptable outcome.”

Returning from a final review mission in Guinea, Liberia and Sierra Leone, Banbury, who was appointed in September, says there has been significant progress in the fight against Ebola over the past 90 days. Banbury pointed, for instance, to the increased number of isolation beds in each country, which stands at two beds per patient in Guinea, 3.5 in Sierra Leone, and 14 in Liberia.

With support from UNMEER and other partners, the three countries now also have sufficient capacity to isolate and treat 100 percent of confirmed Ebola patients and enough burial teams to ensure safe and dignified burials for 100 percent of all deaths due to Ebola.

Banbury, however, said several challenges remain, including the geographical dispersion of Ebola. He also cited behavior change and community resistance as major obstacles in some areas despite massive interventions.

The key to success, according to Banbury, is to effectively engage with communities, and also to maintain vigilance and commitment as the number of cases continues to drop.

“It's an obligation to set very ambitious targets so we can bring this crisis to an end as quickly as possible,” he said. “For the UN, it's a very heavy responsibility. But it's also a privilege to work with these communities and these people. We will succeed together.”

Banbury is succeeded by Ismail Ould Cheikh Ahmed of Mauritania, who will himself be visiting the affected countries next week to reinforce UNMEER's strategic priorities. Before his new appointment, Ould Cheikh Ahmed was appointed Deputy Special Representative and Deputy Head of the United Nations Support Mission in Libya (UNSMIL).