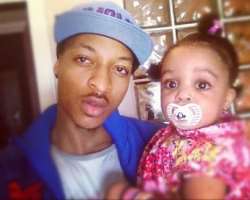 IK Ogbonna, the perceived latest Nollywood 'bad boy' after Jim Iyke, is one of the fine actors that have been romantically linked with some top female celebrities in the likes of Ghanaian actress, Juliet Ibrahim, and Nigerian singer, Adokiye.

Interestingly, the dude, who has a way of shedding off all sorts of negative reports about his personality, has a little secret he had kept to his heart.

According to him, "ha! I don't joke with my daughter oh. She's very dear to me. I will do anything to protect her. As she grows older, I will make sure I equip my little angel with the right tactics of self defence because I can't stand seeing her hurt."

Further investigation by Nollywoodgists.com also confirmed that the name of IK's adorable daughter is Makaelah.