Jonathan in secret talks with IBB 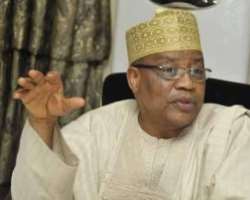 President Goodluck Jonathan yesterday paid a visit to the former Military President, Gen. Ibrahim Badamasi Babangida (rtd), where both leaders canvassed the continued peace and unity of the country.

Speaking shortly after the meeting, which took place behind closed doors, the President said the visit was in appreciation of the role of the past leaders of the country and also to tap from their experiences in running the affairs of the country.

His words, 'First and foremost, I have to use this opportunity to appreciate our leader, President Babangida for his leadership. His commitment to ensuring that this country is united and we leave in peace.

'Of course, you know that this is the end of the year. Within this period, people pay visits. So I have come to visit him. You know he just came back from a hospital abroad, not too long ago. Since he came back, we have not seen. I need to see my father to know how he is feeling. I am quite pleased the way I have seen him.

'You also all know that as a nation, we are facing challenges: security challenges all over, not just in the North. Yes, (there is) Boko Haram in the North. The South is not safe: commercial kidnapping and robbery.

'He (Babangida) is one of our experienced leaders. As somebody who is sitting where he was before, I need to see them from time to time to listen to their suggestions. That is one of the areas how we can collectively move the country forward and ensure that Nigerians live in peace. That is the key thing and I am quite pleased that we had fruitful discussion.