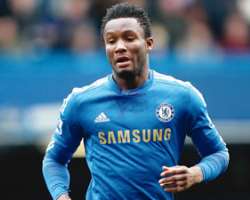 Chelsea manager, Jose Mourinho has a full squad to choose from when the Premier League leaders tackle Southampton Sunday.

The Blues boss is likely to make changes for the Blues' second match in three days.

Andre Schurrle, John Obi Mikel, Filipe Luis and Didier Drogba are among those who could come in.

Mourinho has been forced to defend Branislav Ivanovic after he became the latest Chelsea player caught in a diving storm.

West Ham boss Sam Allardyce accused Blues defender Ivanovic of going down too easily after a first-half tussle with Andy Carroll in the Hammers box.

League leaders Chelsea were in the spotlight a fortnight ago after Willian and Diego Costa were booked for diving against Hull.

Allardyce said: 'I thought he (Ivanovic) went down looking for a penalty. I don't know about (players being) entitled to go down.

'They try and make the referees' mind up for them.

'Staying on your feet does not get rewarded if you're fouled. We all know that.'

Allardyce refused to go any further when asked whether Ivanovic deserved a booking, saying: 'I'm not paying any more money to the FA.'

But Mourinho backed his man, saying: 'I think it's a penalty. The other guy grabs him if you look at it on television. But it was an isolated situation.'

Angel Di Maria is likely to miss out with a pelvic injury, while Marouane Fellaini and Adnan Januzaj are both ill.