How P-Square, Wizkid, others thrilled audience at Rhythm Unplugged 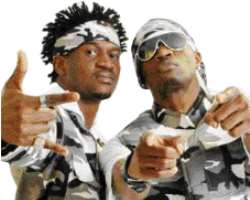 The much talked about Rhythm Unplugged sponsored by Pepsi which enjoyed massive media presence for weeks, held last weekend amid pomp. It lived up to its rating as the biggest entertainment event to hold in Nigeria this year.

This edition was special as it marked the 10 year anniversary of the event. With Basketmouth and IK Osakioduwa delivering the humour, DJ Humility on the turn tables; opening acts by 2K, El-Prince, and Ruby Gyang, this year's Rhythm Unplugged was nothing short of 'a gathering of best of the bests' in the Nigerian music scene.

Attracting the best entertainers the country can boast of, the event which took place at Eko Hotel and Suites, Lagos, was anchored by the duo of Basket Mouth and IK of the Big Brother fame. They ensured there was no dull moment while the all- night-show lasted.

Leading the way, Paul and Peter Okoye of P-Square stormed the stage and held the audience spellbound with their hit songs like 'E No Easy', 'Shekini', and Collabo, leaving the audience yearning for more. But when Davido mounted the stage, all the ladies in the house took to the floor, dancing to the rhythm of his 'Aye.' Also, MI, Presh, Sound Sultan, Kaffy, Olu Maintain, Rugged Man, Don Jazzy and the Mavins Crew, were on hand to thrill the teeming audience.

The party wasn't over yet until Olamide and Pyhno came on stage. Wizkid, Pepsi ambassador, sang to the ladies especially those who stood on their seats singing along with him.

Commenting on the event, an elated Head of Marketing, Seven-Up Bottling Company Plc, Norden Thurston, said: 'The array of stars at Pepsi Rhythm Unplugged goes to show the huge talent base in this country. This creative gifts lie with the youths and who could better project and support the youth more than a youth brand like Pepsi which has over the years been involved with youth and talent.'

The audience, tired from dancing all night, felt there was nothing else that could separate them from their seats, but when Olamide and Phyno climbed the stage to deliver what is undoubtedly their best performances, the audience took over the singing of familiar hits like 'Awon Goons Mi' and 'Man of the Year'. Vanguard