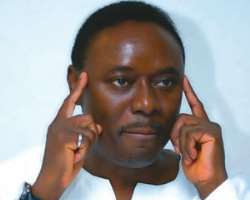 The founder and presiding pastor of Household of God Church International Ministries, Pastor Chris Okotie has said that President Goodluck Jonathan's declaration for the 2015 presidential election on November 11, 2014 has occult  significance.

Okotie, who wrote on his Facebook page on Friday, emphasised that the exact date the President made his declaration had a ritualistic undertone.

He said, 'The implication of Dr. Jonathan's declaration on that day (11-11-2014) has occult significance. When the number is repeated, it takes a greater ritualistic intensity.

'This sacred number in the occult world demonstrates an appeasement of the powers of darkness to favour the supplicant. The name of Satan in Latin is LVX. L is 50, V is 5 and X is 10. When you add that together, you get 65. When you add 6 + 5, you get 11. Satan's number is 11.'

He said the question would be whether the President's declaration was orchestrated by occult considerations or a mere coincidence.