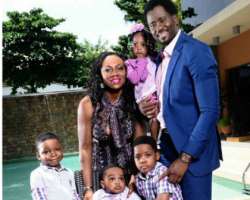 Actor cum model and presenter, Uti Nwachukwu out of his philanthropic nature holds a charity event every year where he pulls together a number of stars to help put a smile on the face of less privileged children.
This year Uti had stars like Flavour, Melvin Oduah, Vimbai Mutinhiri, Chigul, Kenneth Okoli, Saeon, IK Ogbonna and more cheer up the kids while also donating tons of things to them.
Speaking with Nollywoodgists.com recently he said, ' Its called Uti Meet With Stars and comes up every end of the year. I gather celebrities, then we pull our resources together and shower them on less privileged kids. I started it since 2011 and its has been a great success. Putting smiles on the faces of these kids are just so fulfilling. Others celebrities have been responding well."