Jonathan vs Buhari: You either vote Goodluck or bad luck, Okupe tell Nigerians 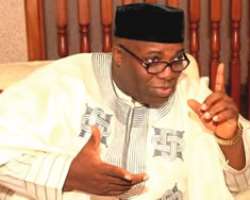 The Senior Special Assistant to President Goodluck Ebele Jonathan on Public Affairs, Dr Doyin Okupe, has said that the choice for the 2015 presidential election is crystal clear, noting that, it is either Nigerians vote good luck or back luck.

Okupe while speaking at an event organised to unveil the candidate of President Goodluck Jonathan held at Sheraton Hotels, Ikeja, Lagos, southwest Nigeria, said,' There are two candidates for next year's election, it is between Goodluck Jonathan and Muhammadu Buhari. The choice in this election is crystal clear, it is either good luck or bad luck.' We are not there yet but we will get there very soon.'

'People say I am a Goodluck Jonathan fanatic and it is true. I stand for and work for what I believe. I have worked for two presidents and I speak because I believe in what I say. I do not wish to denigrate anybody. This Goodluck Jonathan is the very best that we have seen.

'There is no offense to compare ourselves with Goodluck Jonathan. The man Goodluck Jonathan bears a lot of burden, he keeps quiet, he is focused and does not talk anyhow so that Nigeria will remain one. There are members of the opposition that are deaf. It is not by coincidence that every good thing is happening in Nigeria,' he said.

Yakassai, who listed some of the giant strides of President Jonathan also commended the ruling PDP for giving the president a return ticket to fly the party's in the presidential election.

He also commended the president for retaining Vice- President Namadi Sambo despite intense pressures from many quarters that he should be dropped.

'I am happy to know that President Goodluck Jonathan was endorsed by his party, the PDP, as its presidential candidate. I also want to congratulate his party, the PDP for introducing the method of right of first refusal to Nigeria and I hope other political parties will adopt this measure to prevent any form of rancour in political parties. This is the type of politics that we are looking for in this country, politics of ideas and programme,' he said.

Speaking on the Boko Haram issue and the government's efforts to successfully tackle insurgency in the country, he said the claim in some quarters that Boko Haram was created by some elements to destabilise Jonathan's administration or is being sponsored by the President to perpetuate himself in office is erroneous, adding that, Boko Haram has been in Nigeria since 2002.