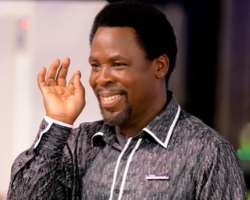 At the ongoing coroner's inquest into the cause of a building collapse at The Synagogue, Church Of All Nations (SCOAN), building plans for the collapsed structure were submitted by the town planner while a NAMA official admitted that a military aircraft flew close to the building several times on the day of its collapse, contrary to what he had said to the court three days earlier that it did not fly near to the building.

While undergoing cross-examination by counsel to the SCOAN, Olalekan Ojo, the Deputy General Manager in charge of Air Traffic Control of the National Airspace Management Agency (NAMA), Mr Rafik Arogunjo's attention was drawn to several contradictions in some of the exhibits submitted by the agency.

In his written deposition, Arogunjo claimed that the said aircraft encircled the Ikotun area of Lagos six times in a training exercise whereas in the letter sent to the police and signed by the Managing Director of NAMA, Engineer Ibrahim Abdulsalam, it was clearly written that the aircraft only orbited the area twice.

There was a mild drama when the counsel to The SCOAN, Olalekan Ojo, presented the CCTV footage of the incident. After watching the clips which clearly showed the said aircraft flying atop the collapsed building, the witness was speechless, insisting he could not comment on the footage.

When probed further if he could present the report of the radar which allegedly depicted the actual distance between the aircraft and the ill-fated building, he said he could not, eliciting arguments between both counsels. They later proposed to visit the control tower to watch the video playback, an action the magistrate ruled out.

Questioned as to the identity of the pilots on the day of the incident, Arogunjo said he could not provide such information although he acknowledged a flight plan was submitted to him. "There is no way I would have known the intention of the pilot on the day of the incident,” he told the court. “The aircraft is designed for military operations to the best of my knowledge but I don't know if the intention of the aircraft was to hit any target.”

"I have heard about an aircraft on a sabotage mission release invisible substance on a target lased with explosive devices with the aim of bombing a target but I cannot confirm if the aircraft had such a substance and we did not lose sight on radar of the aircraft on the day of the incident," he further added.

“My Lord, how can we believe the oral statement of a witness who has been hiding information from us such as the name of the pilot, crew members and the gadgets they carried”, Mr Ojo queried in response to his cryptic analysis.

Meanwhile, the town planner, Bisi Adedire, who was once the National Secretary General of the Town Planning Association and equally the Lagos State Chairman, testified that the collapsed building fell in a manner typical of induced or controlled demolition. He added that throughout his professional career, he had never seen or experienced a building collapse in such a strange manner.

Explaining his rationale, Adedire explained that the building came down once symmetrically, the iron rods were cut at the same level as if no cement had ever been used on them and, even more surprisingly, the foundation was intact. Additionally, all structures adjacent to the building were not affected by the collapse.

Narrating his role in the whole saga, he said he was contacted by the church in June 2014 to prepare a technical report on the church buildings. He claimed that after evaluation, he had informed the church authorities that though they had erred by not getting approval before construction, the anomalies could be corrected.

"I informed them that the law made provisions through a system known as regularisation to obtain the necessary documents,” he explained. “However, it comes with a fine. Consequently, I was contracted by them to regularise the building documents. I started the process immediately and I have official proofs to back it up. Sadly, we had not concluded the process before I heard that the building collapsed." According to Adedire, The SCOAN had paid over N20 million to the Lagos State Government to process the approval.

He further informed the coroner that immediately he heard the tragic news, he went straight to inform the appropriate ministry as well as insisting that the church authorities take inventory of the whole proceedings, a task they entrusted into his care.

"When I got into the scene of the incident on Friday September 12, 2014, I watched the CCTV footage of the collapse and I was taken aback because normal buildings don't fall in such a way, within seconds. Also, the smoke like dust was suspicious."

When queried by the counsel to the church if having an approval was a determining factor in causing a building to collapse, he laughed and said buildings don't collapse on papers. "Though having the relevant papers are important, they are not reasons for collapsed building. Even government structures with adequate approvals have collapsed in the past."

He finally presented to the court the original copy of building plans for both the collapsed building and the adjoining ones still standing.

In another development, one of the survivors of the incident, Mr Taiwo Temitayo Taiwo, graphically told the courts what he saw inside the building prior to its collapse. He explained how he witnessed a rapid flash of lights cutting through the wall, followed by a thunderous bang before the building crashed down. He likened the scenario to a carpenter's saw cutting through wood with precision. His explanation added further credence to the theory that explosives were used as suspected by the police.

Taiwo further clarified the impression that the building might have collapsed as a result of too many inhabitants. He explained, as one of the coordinators of guests to The SCOAN, that the ground floor was a restaurant and dining area for both guests and members.

He then divulged that the first floor was for female guests while the second floor was for the male guests, adding that the remaining floors were yet to be used before the unfortunate incident. This revelation surprised both the Lagos State counsel and the magistrate who assumed the entirety of the building was occupied at the time of its collapse.

Nosa Osazuwa, a writer from Lagos, was present during the coroner's inquest