Victor Umeh—Owner Of The Game 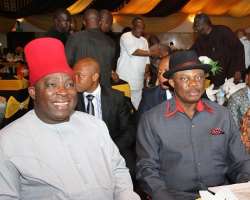 Straining against the leash of slavery and segregationist America, Fredrick Douglas, foremost African American abolitionist once thundered at his fellow blacks this way – “It is not light that we need, but fire; it is not the gentle wind, but thunder. We need the storm, the whirlwind, and the earthquake.” A fiery speaker, Douglas stood out in his day as a charismatic speaker with a blade for a tongue. Nothing in recent political memory invokes the fullness of Fredrick Douglas 'plangent plea as the personality of Chief Victor Umeh, the National Chairman of APGA.

Since emerging on the political landscape like a force of nature, Victor Umeh has established himself as the true owner of the political game, East of the Niger. This AguluUzigbo born lawyer reminds me of what the Father of African Literature, Chinua Achebe, said of the engaging novelist, ChimamandaAdichie on the blurb of her monumental novel, Half of a Yellow Sun. Impressed with the immense narrative skills that the young writer had shown in the novel, great Achebe had described her as being imbued with the gift of ancient storytellers and further enthused that “Adichie came almost fully made.” Similarly, in the political theater of South Eastern Nigeria, Chief Victor Umeh came almost fully made.

Blessed with the oratorical skills of Nigeria's First Republic politicians, Victor Umehcomes across as the political maestro of the East; a sound mind in a sound body, carrying himself with so much colour and panache that you wonder why some less prepared adversaries ever contemplate taking him on at all. While Umeh's charisma and political sagacity are the dread of his enemies, his earthy wisdom, mental alertness and uncanny ability to memorize names and faces stand him out as a leader to watch out for. In truth, Sir Victor Umeh packs the quite energy of a whirlwind and the wisdom of a serpent in one fell swoop. No wonder why for a whole decade and more, Chief Umeh sits atop the political chess game of the South East like the statue of a Buddha, looming over the entire horizon and eclipsing many luminous stars in his home state of Anambra.No wonder too, why Umeh packs a total of eighteen honorary chieftaincy titles garnered across the entire South Eastern region from towns and communities that have seen the rise of his sun as a leader of note.

It is purely because of these qualities that Chief Umeh's recent ambition to represent Anambra Central Senatorial Zone at the National Assembly should hold a measure of interest to every Igbo man and every Nigerian, as it were. Many observers have always felt that Umeh's political philosophy and remarkable approach to leadership are far too big for his native Anambra where he seems to have sunk most of his political roots. The general belief is that he was built for a higher calling; that Umeh should leave the still waters of a little pond and splash around in the roaring waves of the Atlantic where he rightly belongs.

From pre-history to date, great political personages usually have myths woven around them. These myths are often what their name suggests – myths. There might be no substance to them. They simply exist to complete the halo that snakes over these heroes like a rainbow. No politician of note in the South East has as many myths woven around them as Chief Victor Umeh. The stories are sometimes infuriating and at other times, downright ludicrous. Chief Umeh is blamed for virtually every ill that plagues any notable politician in Igboland. His political enemies seem to have out-maneuvered him in the use of the social media. They mobilized a large army of idle youths to go on the offensive against Chief Umeh and the boys seem to have done a great job of it, foisting the image of a monster on this natural-born warrior. In recent times, he has been at the receiving end of cruel attacks on certain facebook groups and a handful of discredited blogs.But Chief Umeh has remained unmoved by the baying dogs at the periphery. It is not certain why he chose this position, but people who are versed in gamesmanship say that Umeh's silence is deliberate and that he has simply assumed the posture of the crouching leopard – a position of strength that precedes a lightening quick strike at his prey.

However, there is also a new thinking that seems to put a lie to all the conspiracies woven around Chief Umeh. The pertinent question that some people are beginning to ask is how possible is it for one man (Chief Umeh) to fleece IfeanyiUbah, RochasOkorocha, UcheEkwunife, Reagan Ufomba, Sullivan Chime, EmekaOffor and even Peter Obi?Even if Umeh retains the services of the most potent medicine man in West Africa, his magic would have failed him before he turnedthe pockets of Peter Obi inside out. Obi is famous for being tight-fisted. Umeh would have to hire a very strong Dibia to defrost Obi's famed frozen hands, they say.

Then again, the flipside of this argument also weighs heavily in favour of Umeh. If it is true that he actually made an ass of all these great men and women on his alleged hit list, then he is indeed the man. It would take nothing less than an extra-ordinary ability to get the better of just about everybody. To my mind; that is very unlikely.But in the unlikely event that Chief Umeh actually succeeded in outwitting all his alleged victims, it strengthens his case for a place in the center. In a country where only the strong survives, Ndigbo need a strong man, a man that is fully gifted with brain and brawn, to represent them in national politics. Under the circumstances, Umeh sincerely seems the best man for a place in the Nigerian Senate. His charisma, native wisdom, nimbleness ofmind and body as well as a gift of words stand him head and shoulders above his closest rival in the ensuing race.

All things considered, Chief Victor Umeh's domination of his political environment is awesome. We need a man like him in the Senate. His shrewdness and mental alertness as well as ability to outwit his opponents in any mind game will ensure that nothing that should come to Igboland is allowed to go elsewhere. Umeh will not just fight for us; he is guaranteed to win for us.