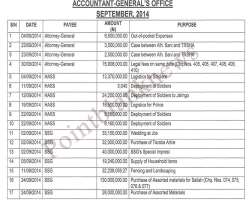 Documents have revealed how the former acting governor of Taraba State, Alhaji Garba Umar shared over N500 million Naira to lawyers to stop his removal by the Supreme Court.

According to the documents obtained only about half of the sum was documented as “legal fees” and gifts”.

In a particular case, Umar approved N19 million as “wedding gift” to the son of the immediate past Chief Justice of Nigeria (CJN), Justice Mariam Mukthar Aloma.

It is not clear what form the gifts took and what became of them. Pointblanknews.com nonetheless gathered that Umar had passed N1.5 million US dollars through a front to bribe the then CJN, but that “the money ended up in the pockets of those agents.”

A source close to the attempted bribery said the former acting governor was “fooled into parting with such a huge amount of money when everybody knew Justice Aloma as a woman with impeccable moral standards.”

Justice Mukthar retired on November 20, 2014. The following day, the Supreme Court sacked Umar, reinstating Danladi, a man he had spent over half a billion Naira to shut out.

Documents from the Office of the Accountant General, Jalingo, revealed that Umar, who had very little formal education, made several scandalous approvals.

Financial experts told Pointblanknews.com that the nature of approvals made by Umar was capable of sending him to prison.

Taraba is one of the poorest states in Nigeria. Last January, Umar signed into law an N83.33bn Appropriation Bill for 2014, less than 20 percent of what states like Lagos, Akwa Ibom and Rivers States budget.

However, the bogus approvals made by Umar did very little to show that Taraba was in dire straits.

For instance, in early September, the then acting governor approved the release of over N105 million to Garvey Yawe, Secretary to the State Government ( SSG).

Yawe had months ago told Pointblanknews.com that he was not required by law to take an oath of office before assuming office as SSG.

On the same day, Tende paid N7 million in two tranches for “case between Alhaji Sani (Danladi) ” and members of Taraba State House of Assembly.

Danladi is the incumbent acting governor of the state.

Umar also paid N76, 908, 000 as to an unnamed lawyer as “legal fees”. No mention was made of the case for which the lawyer was paid the N76 million. However, Pointblanknews.com investigations revealed that the money was paid to stop Danladi from returning as deputy governor.

Umar, on October 28, 2014, spent another N50 million as “solicitor fees in the case between Sani Danladi and TSHA”.

From the Supreme Court end, Umar, on November 17, 2014, approved the release of N19 million for “gifts for the wedding of the son of Chief Justice of Nigeria.”

Another N4,835,000 was released as “DTA for attendance of swearing-in of Chief Justice of Nigeria.”

Barely 24 hours after handing the SSG over N105 million for sundry dubious expenses, Acting governor Umar on September 5, 2014. yet approved N32, 239, 059.27 to the same SSG for “fencing and landscaping.” No mention was made of where was fenced and landscaped.

A week after spending N24 million to deploy soldiers, the acting governor approved N18,500,000 as “logistics for police.”

All the monies were channeled through HASS (Home Affairs and Security Services).

The last two approvals were silent on where the soldiers were deployed.

On September 24. Umar approved the release of N130 million for “purchase of assorted materials for Sallah.”

Not done, the acting governor, on the same day approved another N28 million for “purchase of assorted materials.”

On October 2, 2014, acting governor Umar released N31 million to members of the state House of Assembly for “Sallah.”

On the same day, he approved N13,270,000 for soldiers in Bartaje, and another N7,320,000 as “logistics for deployment of policemen to crisis areas in southern zone.”

Yet on the same 2nd October, 2014, he approved the release of N30 million for the “installation of additional fire hydrants in Jalingo, Wukari and Gembu. No company was listed as the installer.

On 3rd October, N40 million was released to the SSG as “special imprest for October.”

On the same day, another N35 million was released to the Ministry of Social Welfare, Youths and Sports to buy “sports kit for Taraba FC.”

On the same day, he approved the release of N5 million for the “renovation of Mambilla hotel, Abuja.”

On 9th October, the acting governor approved the release of N45 million for “IPSAS training of accountants and auditors.”

A day later, just as the rainy season was tailing out, he approved the release of N47,250,000 and N7 million for “purchase of 15 trucks of NPK fertilizer” and “enhancement support programmes” respectively.

Not done, Umar, on the same day approved the release of N13,629,954 for “installation of TVs, ACs at Liaison office, Abuja.”

The following week, on October 22, 2014, Umar approved the release of

On yet the same day, Umar approved N21 million as “financial assistance to some cattle breeders whose cows were stolen in Ibi and Donga LGAs.”

On October 28, 2014 the acting governor approved the release of N50 million as “solicitor fees in the case between Sani Danladi and TSHA.”

Pointblanknews.com enquiries at top generator dealers in Abuja revealed that a unit of 250 kVa FG Wilson-branded sound-proof Perkins generator (the best in the market) sells for less than N8 million.

“With N47 million, we can supply six units of FG Wilson-branded Perkins soundproof generators,” the sales manager of one of the top companies told Pointblanknews.com.

Barely 24 hours after inflating the cost of the generating sets by over N30 million, the acting governor approved the release of N29 million as “logistics for deployment of security operatives for the PDP ward and LGA congresses” , and another N27 million to 75 soldiers for peace keeping operations in Gindin Dorowa.

On October 30, 2014, he approved the payment of N27 million as “logistics for some internally displaced persons to participate in distributing voters cards.”

On the same day, Umar spent N36 million on “logistics for political office holders to sensitize people for the PDP ward delegates election.”

Still on the same day, the acting governor approved N10 million as financial assistance to “Al-Mustapha Peace and Unity Initiative.”

The following day, he approved N36 million for the “construction of public convenience (toilets), installation of tower air-conditions (sic). No mention was made of the location of the public toilets.

According to the documents, in October 2014, the acting governor spent over N170 million on

As a youth-friendly acting governor, Umar was very considerate on matters concerning the youth. To this end, on November 14, 2014. he approved the release of N8,750,000 as “fuel for youth to attend President Goodluck Jonathan's declaration.”

For the same purpose, he approved N38,720,000 to mobilize “political office holders”.

On November 14, 2014. Umar approved N280 million for the purchase of fertilizer.

Interestingly, no official of the state Ministry of Agriculture has set eyes on the fertilizers on which Umar claimed to have spent over N400 million.

On November 3, 2014, the acting governor approved the release of N45 million for “purchase of 5 vehicles” for the Ministry of Finance. No mention was made of the make and model of the vehicles.

On November 6, the acting governor approved the release of N8,500,000 for “deployment of securities (sic) during LG congress.”

On November 10, he approved the release of another N8,500,000 for “deployment of securities (sic) to Wukari.

Umar is a member of the influential Islamic sect known as Izala aka Yan Izala. The movement was reportedly founded in 1978 by Sheikh Ismaila Idris in Jos, Plateau State, Nigeria.

“He is a complete anti-thesis to everything the Izalla represent.

His looting spree in Taraba has caused us great embarrassment. Umar should stop claiming to be a moslem. He is worse than an infidel,” submitted the official.

Prior to his nomination as deputy governor, Umar, who spots a grey goatee, was a Jos-based dealer in second-hand cars.

He served as a storekeeper with the United Trading Company (UTC) a feat which earned him the alias UTC.

He was appointed deputy governor in early October 2012 following Danladi's impeachment by the State House of Assembly.

The governor's long absence prompted Umar to nudge the lawmakers to proclaim him “acting governor.” Umar had even made spirited efforts to get the legislators impeach Suntai so he might become “full” governor.

“We are honestly surprised at the decision by the Peoples Democratic Party (PDP) to field the sacked acting governor. Garba Umar, as senatorial candidate for the good people of Northern Taraba,” the group said.

Pointblanknews.com could not get Umar comment on the authenticity or otherwise of the approvals he allegedly made as acting governor.

Several calls to his mobile telephone number 08034953391 were unanswered. He equally refused to respond to several text messages to his cell phone.

His business and political associate, Alhaji Ahmed Yusuf also would not respond on behalf of his friend.

Yusuf, whom Umar appointed Director-General of his now rested governorship campaign organization, had reportedly lined his pocket with hundreds of millions of Naira fronting for the ousted acting governor.

Below are copies of some approvals made by Alhaji Garba Umar…