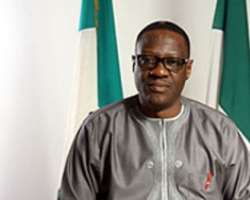 Kwara State Government is to establish an Independent Power Project (IPP) next year in the North Senatorial District of the State.

The State Governor, Dr Abdulfatah Ahmed said this on Monday at the flag-off of 32.8km Ilesha-Baruba-Gwanara Road project in Baruten local government area of the State.

Governor Ahmed said the power plant expected to generate 100 megawatts of electricity will 'power industrial clusters and essential services thus freeing up energy for homes and business in a manner that enhances the welfare of our people and stimulates job creation'.

He also said that 40 secondary schools in Kwara North were part of the 120 across the State that would be rebuilt and equipped in line with global standards and local needs next year.

On the Ilesha-Baruba-Gwanara road project, the Governor said it will cost about N1.5b, adding that the project would subsequently be extended to Kenu and Okuta to cover that flank of the local government.

Governor Ahmed noted that the State Government was taking advantage of the dry season to grade about 500km of roads throughout the State, including Ilesha-Baruba-Gbereberu and Bode More roads in Baruten local government.

Dr Ahmed attributed the enhanced tempo in road construction, especially in this dry season to the conviction that provision of infrastructure, particularly motorable roads was a major catalyst for social-economic development.