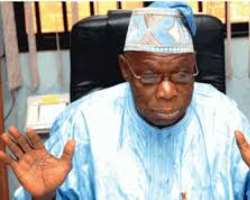 Former president, Olusegun Obasanjo, has appealed the judgment by a Federal Capital Territory High Court, presided over by Justice Valentine Ashi, against the publication of his autobiography, titled 'My Watch'.

The former president said the Judge erred when he granted Interlocutory Orders of Injunction which inter alia restrained the Defendant from the publication of his book 'My Watch' or the content of the letter to the President which is the subject of the suit before the trial judge in the said book.

In his ten ground appeal, Mr Obasanjo said the Judge 'erred in law and acted without jurisdiction in directing the police and security agencies to seize the book from any vendor' and directing him (Obasanjo) to show cause within 21 days on why he should not be committed to prison for contempt of court.

The former president is seeking an order setting aside the ruling of the lower Court made on Wednesday the 10th of December, 2014 and all the orders made thereunder.

It will be recalled that the South West People's Democratic Party (PDP), Organization and Mobilization Chairman, Mr Buruji Kashamu has approached the Abuja High Court asking the court to restrain the defendant, Olusegun Obasanjo from publishing his autobiography 'My Watch'.