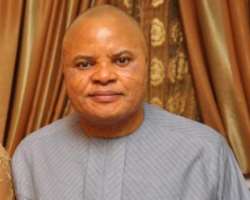 A gubernatorial aspirant, Senator Ifeanyi Ararume, has condemned the emergence of the Deputy Speaker of Federal House of Representatives, Emeka Ihedioha, as the winner of the Peoples Democratic Party (PDP) governorship primaries in Imo State.

Addressing newsmen in Owerri, the Imo State capital, Ararume, who was said to have come second with 336 votes, said that there are errors in the computation of the results.

He claimed that he was short changed while Honourable Emeka Ihedioha was awarded figures he never earned.

In a statement by the DG of his campaign organization, Independence Ogunnewe, he said that following the statistical analysis of the results, Emeka Ihedioha actually scored 325 votes but the figure was inflated with 21 votes, while his (Ararume) 336 votes is actually the right figure.

He called on the leadership of the party in the state and the Chairman of the Imo PDP Governorship Primaries Electoral Committee to, as a matter of urgency, address the matter and declare him winner.