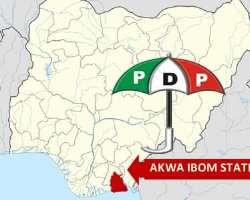 The immediate past Secretary to Akwa Ibom State Government, Mr. Udom Emmanuel, has won the People's Democratic Party primary election in the state.

A statement by the 22 aspirants in Uyo on Monday, read, 'We note the multiplicity of the lists of purportedly elected delegates in Akwa Ibom State freely published in the various news media.

'Ironically, the list that was earlier denied is the same list that is used in inviting delegates to this Congress as announced on Akwa Ibom Broadcasting Corporation.

'Recently another list emerged carrying the imprimatur of the National Organising Secretary of PDP and which list is totally at variance with both the lists earlier signed by the state chairman, PDP and the one announced on radio this morning inviting delegates to this congress.'

The forum maintained that all the lists were contrived in that no ward congresses took place in any of the wards in the state to their knowledge, and that of the National Headquarters of the party.

They stated that despite the plethora of lists, there was no accreditation of delegates by the electoral panel to certify the individuals allegedly being trafficked in heavily guarded buses to the venue of the congress from the Government Houses, Uyo.

'It should also be noted that the purported delegates from the entire state were invited to the Government House where they were addressed, threatened, intimidated and induced with the sum of N1m each to ensure compliance by voting for the governor's preferred aspirant, Mr. Udom Gabriel Emmanuel,' the statement read.