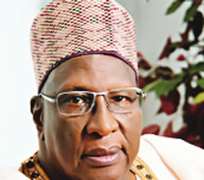 For having the temerity to seek a return to his position as the National Chairman of the ruling Peoples Democratic Party (PDP) through the law court, members of the National Working Committee of the party have suspended Alhaji Bamanga Tukur.

The NWC took the decision to suspend Tukur from the party at its meeting in Abuja on Thursday.

The meeting was presided over by the embattled Acting National Chairman of the party, Alhaji Adamu Mu'azu.