After Being Trapped in a Village, Denrele Run’s Away from Car after….. 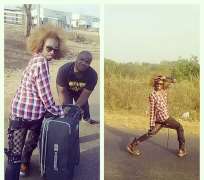 Celebrated Nigerian TV presenter, Denrele Edun, has gone through the ups and down of life to a large extent to be able to stamp his name among the A-list entertainers in Nigeria.

Recently, the energetic VJ was robbed at gunpoint where he lost important valuables, yet he never allowed that to weigh him down as he continued with what he knows how to do best.

Denrele who was on a road trip from Lagos to the University of Ilorin and to Igbenedion University in just two days for show-Hosting, was shocked when he car suddenly had a flat tire and had to park it to take a selfie.

The VJ who could not identify the village he is being traped in, went back to his car with his driver friend and began to exchange pleasantries by farting in the car.

“Road trip from Lagos to the University of Ilorin and then to Igbenedion University in just two days! Back-to-back-Show-Hosting! My Toyota Corolla aka "The Black Ashy" served me well!
2007/2008 or so. Flat tyres in the middle of nowhere and I decided to spring an impromptu photo shoot on myself wiv a couple of villagers looking at me like I dropped outta Mars!
And why is @olusholaremi pushing my box? Oh yeah, we farted in the car....the smell was glorious!” he stated.