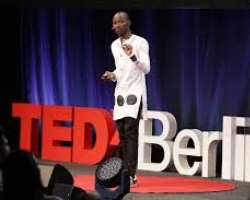 Bisi Alimi, Nigerian born trailblazing LGBT/HIV rights Activist, who is an Aspen New Voice Fellow and World Bank Consultant named in the top 100 most influential people in the world and top 10 most influential HIV/AID Activists will be a Keynote Speaker at the WORLD AIDS DAY LONDON GLOBAL CATWALK, a Fashion, Film and Music Event to mark 2014 World AIDS Day.

The Event is organised by POSITIVE RUNWAY: Global Catwalk to Stop the Spread (of HIV/AIDS) in association with the Universal Peace Federation and Julius Reuben London at 43 Lancaster Gate, London W2 3NA from 6.30 p.m. – 9.30 p.m.

Bisi will also join London's top models and beauty queens to walk the Runway in the Catwalk Show with POSITIVE RUNWAY's own world famous signature RED RIBBON Models who “walk for a cause and model for a purpose.”

“The world has seen an amazing decline in the rate of HIV infection across the world. However, one of the greatest risks is the continuous cut to global HIV funding. Rich countries are breaking their promises on giving the world an AIDS-free generation”, says Bisi

Bisi is the Founder of Rainbow Intersection and a lecturer in Pre and post Colonial Sexual Orientation and Gender Identity at Free University in Berlin. His focus is on promoting human rights for gay Africans and the prevention of HIV/AIDS while creating dialogue and engaging in world conversations around race, culture, sexuality, social equality, and change.

A new report published by Public Health England released on 18 November 2014, in advance of National HIV Testing Week, shows that there are now nearly 110,000 people living with HIV in the UK. Around a quarter of these (26,100) are unaware of their infection and at risk of passing on the virus to others through unprotected sex.

“After 30 years, the world still continues to experience new infections at an alarming rate. Women and girls are especially at high risk of contracting HIV as a result of domestic violence and gender based violence including rape and early child marriage”, says Justina Mutale, African Woman of the Year and Founder of POSITIVE RUNWAY.

POSITIVE RUNWAY is a worldwide HIV/AIDS response campaign that aims to bridge the gap in the global efforts to stop the spread of HIV/AIDS in a discourse appropriate to the 21st century young generation by speaking the same language as today's youth. The Campaign tours the world working with celebrities from fashion, film, music, television, sport and other arts as influential advocates in the fight against the spread of HIV/AIDS and other scourges affecting today's young generation and society at large.

Multi-Award winning Fashion Icon, male supermodel and Designer, Julius Reuben, who is the Creative Director at POSITIVE RUNWAY, will be launching his new collection at 2014 WORLD AIDS DAY GLOBAL CATWALK which aims to “walk the HIV/AIDS virus out of our globe” to help secure an AIDS free generation and AIDS free world. Please see Showreel at: https://www.youtube.com/watch?v=BZYY3rrxdC4