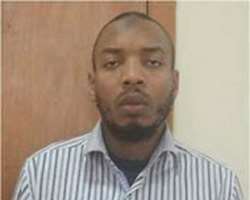 A Federal High Court in Abuja on Monday struck out the terrorism charges instituted against Aminu Ogwuche, the alleged mastermind of the April 14 blast, which killed over 75 persons in Nyanya, a suburb of Abuja.

Justice Adeniyi Ademola struck out the charges filed by the Inspector General of Police on the grounds of want of diligent prosecution.

The case had suffered many adjournments due to failure of the police to produce the accused, who had been in the custody of the Department of State Services since he was repatriated from Sudan to Nigeria.

The police and the DSS, through their respective lawyers, had also during court proceedings jostled for the prosecution of the accused persons.

At the Monday's proceedings, Justice Ademola struck out the suit due to the absence of the legal representative of the IGP in court.

'This criminal charge is hereby struck out for want of diligent prosecution by the complainant, Inspector General of Police, and his prosecutor,' the judge ruled.

In a related development, the judge in a fundamental rights suit filed by Ogwuche, granted an oral application sought by his counsel, Mr. Ahmed Raji (SAN), for family members to have access to him.

The court ordered that three lawyers from Ahmed Raji's law firm and two of Ogwuche's family members be allowed access to the suspect who has been in DSS custody.

The DSS counsel, Mr. Clifford Osagie, and the lawyer representing the Attorney-General of the Federation, Mr. Taiwo Abidogun, both appearing in the suit filed by Ogwuche did not oppose the oral application.

'Applicant (Ogwuche) be given medical care in the respondent's custody and referred to the National Hospital, Abuja, if need be.'

The judge has adjourned the matter till December 5 for hearing of the originating motion.

Ogwuche's counsel, Raji, had asked the court to grant his client bail through the fundamental human rights suit.

He alleged that the AGF and the DSS were breaching the fundamental rights of the applicant by holding him endlessly against the provision of the law.

Raji had argued that when a suspect was arrested by security agents (the respondents), the suspect should be charged before a competent court within the time allowed by law and should be allowed access to his family and lawyers.