How Dickson ran into trouble with Presidency 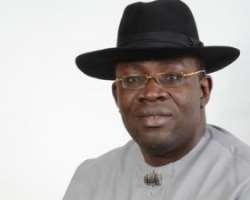 Strong indications have emerged that political leaders and elders of Bayelsa state have resolved to intervene in the seeming breakdown in the relationship between the state governor, Seriake Dickson and the family of the president.

Although both parties have maintained that all is well in spite of obvious strain in their relationship even as signs to contrary manifest on a daily basis, the real reason for the nose dive in the once cordial brotherhood was said to have reared its head on three weeks ago when the governor declared that he would not 'bow to any individual, no matter how big'.

Governor Dickson was reported to have made the statement on November 2 at the annual state Thanksgiving ceremony held in Yenagoa, the state capital where President Goodluck Jonathan, who was billed to be special guest of honour at the event, was said to have avoided the ceremony even though he was in the state.

President Jonathan's absence, which was preceded by the exit of his wife, Dame Patience, reportedly angered the governor who could not hide his feelings at the church service. Literally making reference to the absence of the first family amid reports of a frosty relationship, Governor Dickson said; 'I only fear and respect God, it is only God I can bow down for, I will never bow down for anybody no matter who the person is.'

The thrust of the strained relationship has been the second term ambition of Governor Dickson whose desire to return has been put under challenge by the rumoured ambition of presidential aide, Hon Waripamowei Dudafa who is allegedly being bankrolled by the first lady, Dame Patience Jonathan.

A member of the PDP Board of Trustees (BoT) from one of the South-South states confided in our correspondent that the deepening cold war was disturbing to elders of the party, especially in Bayelsa state.

'The cold war has been disturbing most leaders from the state; we have even tried to ensure that all feelers relating to the strained relationship are blocked so that we avoid this mess because it is disturbing to all of us.

'Some of us had thought of intervening before now but for the unfortunate statement credited to the governor that he does not bow down to any human being except God. It is as if any human is equal to God but there are some statements one does not need to make in the face some circumstances.

'As it is, we have to make more efforts to stop this flopping relationship before it degenerates because we cannot continue to present Bayelsa as a state replete with political inconsistency; if you recall, no governor has ever made a second term whether by accident or by default,' he said.

The soared relationship between the governor and the presidency took a new twist a few months ago when against the wish of the president, associates of the governor embarked on a zoning arrangement that shut out the president's men from the race to the national assembly.

Only recently, speaker of the Bayelsa State House of Assembly, who is also a close ally of the governor, Hon Benson Konbowei has cautioned the president not to interfere in the choice of senatorial candidates for the party in the state.