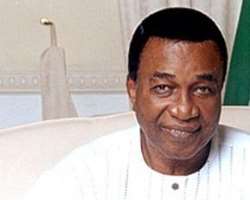 Former Governor of old Anambra State, Senator Jim Nwobodo has disclosed that  his son, Dr. Ifeanyichukwu Nwobodo jnr, died out of negligence by a Nigerian doctor.

Senator Nwobodo disclosed that his son was already cured at Anderson medical cancer centre in Huston Texas USA and was asked to stay longer in USA but he returned to Nigeria for nostalgia of his family.

He said that Ifeanyichukwu suddenly developed pains on the legs and was taken to a Consultant Oncologist with the University of Nigeria Teaching Hospital, UNTH, Enugu.

The deceased former governor further revealed that the doctor instead of taking him to the teaching hospital where there are facilities for emergency, the Consultant rather referred his son to his private clinic where he (the doctor) administered his son with an injection that immediately led to his death.

Senator Nwobodo made the revelation when the Abia state Governor, Chief Theodore Orji paid him condolence visit in his Amechi Awkunanaw country home in Enugu.

According to him, the doctor on discovery of the complication caused by the drug, tried to rush his son to Niger Foundation hospital where he died even before getting there.

He said: 'My son was five months sick before I knew about it and was planning to go to India before we took him to USA. He was given Visa for two years because the cancer was at stage four but they treated him.

'I called him again and when I didn't hear from him I sent him text and I asked the doctor to tell me why he gave my son injection that made him unconscious, he said he was sorry and that he was trying to resuscitate him. I spoke with him by 6 30pm and by 7pm he was dead.

'It is painful because this is something that would have been averted and I can't understand why a Dean of Department of Medicine should leave the hospital where he has all the equipment to go to his private clinic and I believe that is how some other people die.'