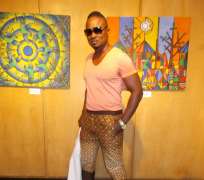 INTRODUCTION:
The film festival was centered on movies shot across Africa; first day was centered on the advent of oil and its economic implications. It also envisaged the ills and negative tilt crude oil discovery had caused some African States like, Nigeria, Ghana and the threat it poses on Kenya.

This is will be enthralled from the perspective of corruption amongst leaders and lack of character amongst the masses. The two major players in a State's progressive economy, whether, social or political, the media and judiciary are key. My name is Von Apochi a Nollywood actor from Nigeria; I strongly believe that we have lost the true sense of character and rendered our potential prowess powerless. It is true that in a societal milieu, if intellectual cultures have not been consummated illiterates become philosophers. We have hidden our might and power deep down in a forgotten ruin that we feed like babes and allow incompetence take hold of our economic play-stage.

The media has caused more damage than good. When these will pass, I have hope, well, it will pass. The same people in the press and judiciary will inherit the exogenous mar of imagery and irreparable dent of State character. Film is good but film should portray hope and vision for generational change not damaged emotions. True, let the truth be told but wisdom be applied in telling the truth because all we are looking out for is change for the good. Hollywood made me believe America flag is the greatest flag on earth, they made me believe the American president is the most influential and most powerful man on earth. Hollywood made me believe the American police are omnipresent; they further made me believe that the white house is the most beautiful place to inhabit and so many more other things. All of these were made possible even when I had my doubts, lies became true.

The Syria crises made me see the vulnerability of the most powerful man in the world. Chemical weapon usage and its debate that was smartly won by Russian president Putin that eventually made Putin the most influential man in the world for a short period of time before the Ukrainian crises sprung up to a prime. My point is, everything they tell us is a lie and sweet lie, lies that become truth. These lies become truths because the law of attraction is, “believes turning imagination into truthful reality”. This is what I refer to as the power of the human mind to believe. Our media have a lot to do with the image laundry in Africa. In my own opinion, I believe there is so much corruption and human right abuse going on in the West (developed countries) but why should the West sell negative media when they have not exhausted the positive ones.

A Radio Presenter & TV Host, Von is show host of the Triple-M show syndicated on television stations across the country.

As the 'Voice Of Nokia 2010' Warranty campaign, Von is also a voice-over artist and has added his dynamic voice to major brand promotions/adverts including: Dangote, Samsung, Sun News Paper, LG, Best Brands and many more.

Von hails from Oil rich Delta State of Nigeria. He is from a very humble background and believe his driving force to success is God and self determination.