ALGON Chiefs chased out of office 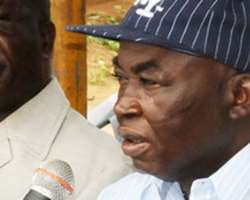 The national leadership of the Association of Local Governments of Nigeria (ALGON) was on Thursday chased out of the office in Abuja in compliance with a judgment of a Federal High Court which resolved the crisis rocking the association in favour of the board of trustees.


The national secretariat of the association located at the sixth floor of West African Examinations Council (WAEC) building in Maitama, Abuja, was also forcefully taken over by the board of trustees of ALGON with the support of police mandated to enforce the court order.


The Chairman of the Board of Trustees of ALGON, Mr. Umar Kassim Ibrahim, who led the police to recover the office complex, told journalists that the action was to put an end to the era of impunity, arrogance, and lawlessness in the body by the former leaders of the association.


He said the tenure of the former President of ALGON, Chief Nwabueze Okafor, had expired since January and had become a former local government boss but declined to vacate office in-line with the provision of the constitution of the body.


Ibrahim stated that in spite of several court judgments and orders against his continued stay in office, Okafor allegedly  disregarded and disobeyed the orders.


He said explained that police have to be brought into the tussle in order to force the former leaders out of office.


He said: 'By our constitution only serving chairmen of the 774 local government areas in the country are eligible to be ALGON members and to hold offices as officers.


'The movement your tenure expires as a local government Chairman, you have to automatically vacate office for the new officers but in the case of Nwabueze Okafor, his tenure as Chairman of Enugu South Local Government expired since January. He had handed over to his successor Mr. Victor Oguejiofo Agbo.


'But unfortunately, the same Nwabueze refused bluntly to vacate office as ALGON President even when his is no longer a council chairman, so we have to invite the law enforcement agents to do their lawful duty.'


He said a six-man interim committee had been set up to hit the ground running and conduct election for new officers within 30 day.