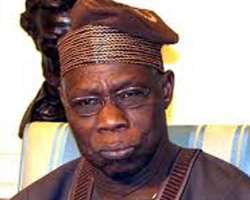 Former President Olusegun Obasanjo yesterday, extolled the virtues of women in politics, saying they are more reliable than their male counterparts.

Obasanjo stated this when the Nigeria Association of Women Journalists( NAWOJ), paid him a courtesy visit and bestowed on him an award of Father of Nation'' at his Abeokuta residence.

The elder statesman  added:'In politics, women are more reliable than men. When a woman says she is with you, you can believe that she is truly with you . But if a man tells you he is with you and you catch him in another meeting, he will tell you it is politics. It should not be so. When a politician's words cannot be believed, then you are turning politics into another thing, a politician must be a man or woman of honour, that believes in morality'      Speaking further, the former President noted that  politics must be played with decency, dignity and honour that women are known for, as he added that one of the best journalists that ever served him was a woman-the late Mrs Oluremi Oyo.

He expressed worries that women were  not often given chance to exhibit their potential because of the cultural and religious prejudice adding that this should not be so as only men cannot make a society.

Earlier in her speech, NAWOJ'National President Mrs Ifeyinwa Omowole, said the visit was in recognition of  Obasanjo's belief in the unity of Nigeria.

She observed that the recent development in the country was due to lack of unity among the various ethnic groups ,saying that to correct the ugly trend , NAWOJ members as mothers were planning to have a unity conference next year which Obasanjo is expected to be the Chief Host.

She further disclosed that the association was planning a housing scheme for its members across the country next year, where all state governments would be stakeholders