I Would Have Been Central Bank of Nigeria (CBN) Governor If...—Desmond Elliot 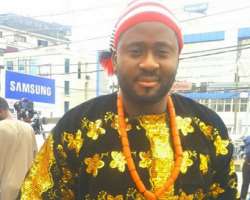 Top Nollywood actor-cum-director, Desmond Olusola Elliot declared in a recent interview monitored by Nollywoodgists.com that he had a dream of becoming the Governor of Central Bank of Nigeria (CBN).

The popular actor, speaking with Village Square, disclosed that he had the intention of working as a banker, where he had hope to become the nation's chief banker, but because he later found joy in acting after he was introduced to it by someone, he decided to remain an actor.

Desmond is one of the most respected actors in the industry doing well. He recently expressed the enthusiasm to become a member of the Lagos State House of Assembly in 2015. He also said he will not leave acting completely, but some have doubted that.

Recently, the Rivers State Governor was alleged to have insulted Nollywood practitioners at an award ceremony in the state. He was reported to have said most actors are in the film industry due to circumstances. This purported comment generated harsh criticisms from some Nollywood stakeholders.