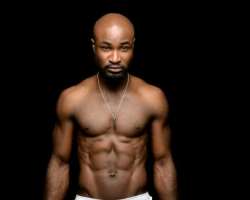 After getting wide recognition with his 'Mandela' tribute song and 'Beta Pikin', the singer released another song entitled 'Kolombo', which is gradually becoming a national anthem.

Over the weekend, Harrysong was on a Soundcity programme, where he shared his dream of working with US-based artiste, Timberland.

"I would like to work with anybody who has something great to offer in terms of good music. I can't really mention Nigerian artistes I would love to work it, as long as they have sellable music, I am in for it. But I really wish I'd be privileged to work with Timberland, he inspires me a lot.

“I like his kind of music and the energy he puts into his songs. I am still looking forward to that Collabo with him," he said.

On what has brought him this far in an industry filled with unimaginable talents and fierce competition, Harrysong maintained that hard work has kept him going.

"I'm not really scared of anything. What has brought me this far is hardwork. I don't like to give excuses, because I have everything it takes to make it in life. I don't give room for excuses. When you talk about fulfilment, I am not yet there; there's still a lot more coming ahead. This is the first phase of my career. I write songs every day. I work hard every day. So, there's still a lot more to come.

“If music didn't work for me, I don't know what else would have worked for me. Maybe I would have gone into football. Music is my life and I thank God for His grace and mercy," he added.

Please Pay Me What You Owe Me, You Debtor--Duncan Mighty Tells Gov Amaechi

What We Always Go Through On Movie Locations—Upcoming Actress Reveals