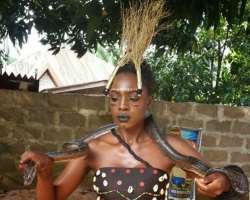 Gone are the days when Nollywood makes use of fake instruments and other things to make movie look real. Thumbs up to the rapid development currently faced in the industry and how it has helped create employment for talented youths.

Former Big Brother housemate, Beverly Osu, may have had her own share of scandals while in the house, but she has not allowed that affect her career as she takes the most daring role in interpreting a script where she had to hold a live snake. Hmm, what a risky thing to do.

Recall that the actress, some months back, lost her father to the cold hands of death and had a quiet burial for the dad which was held on the 19th and 20th of September, 2014, in Delta state.

The video vixen, who is currently on set of the movie 'the curse of the seven,' said throughout her career, she has never had such a challenging role of having to hold a live snake. According to her, “my face shows confidence but my heart is about to explode.. I try to challenging myself for the love of my job and the confidence I have in GOD.. I STAND OUT..I AM AN EXTERMISE. BLACK DIAMOND.. TO carry a life python...eish baba.” “”Hmm ….still fighting my fears … This is a tip of the ice berg What i go through on set everyday… feeling that snake move on my body …eww so disgusting.”

Nollywood Stars Who Have Delved Into Politics