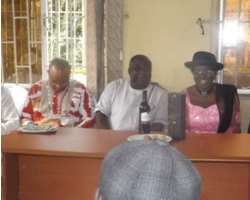 Warri- The People's Democratic Party (PDP) executives in Warri South local government Area, Delta state has endorsed Dr. Mrs. Esther Uduehi for the number one seat in the state, because of her track records in both Federal and state level over the years, urging other local governments to go for the best candidate.

The PDP executives gave the assurance during the consultation visit by the governorship hopeful. They said that Dr. Uduehi who doubles as the National Chairman for Mass Literacy and Adult education, Abuja, has been a woman to reckon with having served in various capacities with her vast exposure around the globe, promising that she can be trusted.

The Chairman of PDP, Warri South, Mr. Ama Agbajor explained that they are proud of Dr. Uduehi because of her achievements over the years, assuring that the changes she has done to the nation during her days in the Bendel State will be brought to bear.

Some of the positions Dr. Mrs. Uduehi have held included being the first woman to be sole administrator of a local government in the country, first woman to be appointed as Special Adviser to the presidency on National Assembly matters among others.

Mr. Agbajor assured, Dr. Uduehi of his people's support in her ambition promising to take the message back to the good people of Warri South. He called on other local governments PDP executives to queue behind Dr. Uduehi's candidature and urged other aspirants to shelve their aspiration and root for Dr. Uduehi.