Waje's Wig Falls Off While Performing 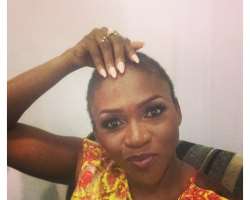 Whats is up with this public embarrassment with our celebrities, last night, Peter Okoye of Psquare fell off the stage while performing at a show. Now its the turn of Waje.

Last night (September, 30, 2014) the award winning soul singer was one of the star performers at Beat 99.9 FM's 999 Concert to celebrate their 5th anniversary, which went down at the Landmark Event Centre, Victoria Island, Lagos.

The singer showed up at the event looking hot in a mix print jumpsuit which she teamed with yellow pumps, and who could miss her red hair! But her hair didn't stay on that long. As she thrilled her fans with some of her hits, the 'Onye' singer's wig did a back flip and fell off while she was deep into her performance. She even posted a picture of what happened and laughed over it.