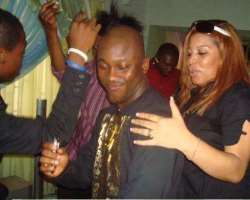 Few years ago, when the news of the break up between Monalisa Chinda and her husband Dejo Richards spread like wild fire, many thought the two would reconcile later, but it was unfortunate, they didn't.

The actress told a story that she went through domestic violence in the hands of Dejo, which got a lot of tongues wagging and feeling pity for her. However reports have it that insiders allege the actress may have mended fences with her ex hubby Dejo Richards.

Report has alleged that Dejo Richards whose second marriage has reportedly crashed has been spotted with the actress on few occasions. The report also said that Monalisa's ex now spends more time with their daughter, unlike before when he was denied contact.