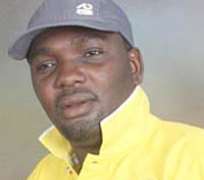 In a letter addressed to the General Secretary of the association, which was obtained by Nollywoodgists.com, Yomi Fabiyi cited "personal reason" for his decision to resign his position.

The actor stated that he wishes his abrupt decision to resign will not affect the morale of members of the group.

Yomi Fabiyi later updated his Blackberry status as thus, "I have today resigned my position as PRO of The Golden Movie Ambassadors of Nigeria, copy of my resignation with the secretary. Thanks to all members."