I Gave Maheeda Clothes and Never Had Any Affair………..Ruggedman 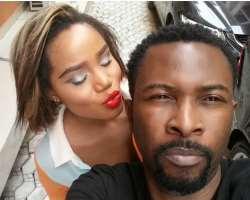 Nigerian rapper, Ruggedman, has cried out to those that care to listen that he is not having any affairs with controversial singer, Maheeda.

Ruggedman explain that he only called the singer up because he wanted her to do something for his clothing line, 20th September wears.

The rapper disclosed that he has known Maheeda for about seven years and have been friends for a very long time with no amorous relationship between them.

He revealed that she came to an office close to his house and he had to ask her to drop by to pick up the cloths because she was leaving for Holland.

Well, as we all know, Maheeda does not care about issues like this as the singer has proven all perceptions wrong as she took to her social media page to advertise the 'Agidi' Versity Jacket Ruggedman just launched into the market.

She tweeted; " 8 figures " go order your own for @ruggedybaba place ohh there's for guys too, this is for ladies ! "

Well, lucky you Ruggedman, Maheeda has just defended you, so your fans can now beleiev you for once.