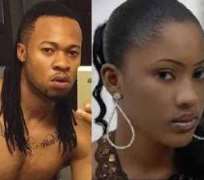 If gist making the rounds is anything to go by, it means Flavour will soon be a father!

Report has it that the singer's girlfriend, Sandra Okagbue who once dated Mikel Obi is allegedly pregnant for him and expecting to deliver soon.

We also learnt Okagbue is already in the US where she's expected to give birth in few week's time.

Flavour, we learnt, allegedly wants to keep it secret however, he isn't ashamed to claim the unborn child.

Flavour's reps however says they are not aware of any such pregnancy, going further to state that they've not heard of the reports .

'I'm not aware of this or any report about this', a rep explained.

If truly Flavour is going to be a daddy soon, it's definitely going to be bad news for wannabes who have been scheming to have flavour all to themselves...

But in case the rumour comes true, congrats to Flavour...and if not...move over ladies cos it could still be you!
-Daily Times
© 2014 Nollywoodgists.com