Ebola: A Warning Message For The Entire World 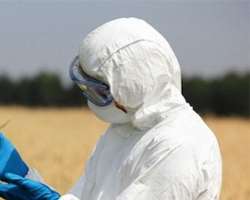 There is no doubt that the possibility of the world coming to an end very soon is now very clear to everyone. The present world is critically ill and it's now living in extraordinary and bizarre times. Strange and unimaginable things are happening almost everyday. The present world has started to reveal terrifying and mind-boggling events resulting in great fear.

Spiritual decadence, general insecurity, wars and rumors of wars, endemic corruption in every segment of the society, proliferation of pornography, social media and its destructive influences, widespread of deadly diseases etc. have become a global epidemic.

The sudden arrival of the strange and unwanted visitor named "EBOLA" is another unimaginable and terrifying event. It appears that the present world is under a siege of the kingdom of darkness. We are indeed in the perilous times when iniquity abounds and the love of many people for the things of God is drastically waxing cold. We are in the last days and the signs are everywhere.

A recent research revealed that in every second, almost 30,000 internet users watch nude pictures online while companies that are into pornography make at least 10,000,000,000 (US) dollars every year. It was recently reported on the media that a young man had sex with a dog while there were several cases of other men that had sex with goat.

The mind-boggling question is "Why are these strange and unimaginable events happening at this time? The simple answer is "The termination date for the present world is undoubtedly approaching its climax.

In the case of the newly arrived EBOLA, a wise person will simply understand that it is nothing but a "warning message" and another "LAST DAYS EVENT" that reveals the possibility of the present world coming to an end any moment from now.

It is also a sign that the "worldly pursuits" and "cares of life" that men and women are running after at the expense of their souls and eternity will soon be gone forever, leaving many people in everlasting regrets. i.e. The time of grace will soon be over.

What then is the escape rout to the dangers of the strange, terrifying "ebola" and other unimaginable last days events?

The only way out is for every individual to humbly and sincerely make every necessary restitution and plead for the mercy of God because the present world is full of sins and will soon be judged for its sinfulness and there won't be time for any careless person to re-order his or her life.