By The Tony Elumelu Foundation 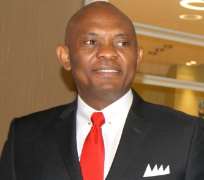 All share a dedication to the development of Africa through a focus on the continent's young people, an approach that resonates with the Tony Elumelu Foundation's own emphasis on entrepreneurship as the key catalyst for Africa's economic transformation.

According to Dr. Wiebe Boer, CEO of the Tony Elumelu Foundation, "There is a critical need in Africa for leadership development. This is a great opportunity for us to support the work of exemplary African political leaders to equip the next generation, so their experience becomes a benefit to us all."

Through the African Leaders Grant, each organisation will utilise the funds to support initiatives associated with the entrepreneurship and leadership development pillar of the Tony Elumelu Foundation.

"The Tony Elumelu Foundation has previously partnered with the Olusegun Obasanjo Foundation to support our work in youth employment in Africa. It is a personal passion Tony and I share and something that this grant will allow us to continue doing. This collaboration to equip the next generation is an example that I hope others will follow.

The African Leaders Grant aims to support efforts across the continent through the work of the grantee foundations and the Tony Elumelu Foundation that will influence policy reform, promote effective leadership, training, and mentorship of emerging leaders across Africa. According to President Kufuor, “This grant promises a real opportunity for building longstanding partnerships with similar foundations in Africa striving to empower our youth.”

Speaking on the legacy of the African leaders involved, TEF Founder Tony O. Elumelu remarked, "Each of these leaders has taken great pride in fostering the next generation of African business and
political leaders, who will be the drivers of Africa's future growth and prosperity. Africa's development relies on our ability to nurture a new generation of young leaders, as these African icons are already
doing."

For more information about the African Leaders Grant and the Tony

About the Tony Elumelu Foundation

The Tony Elumelu Foundation is an African-based, African-funded philanthropic organisation. Founded in 2010, our mission is to support entrepreneurship in Africa by enhancing the competitiveness of the African private sector.

We believe our work is driving lasting solutions that contribute positively to Africa's social and economic transformation. Employing an integrated approach that utilizes impact investments,

selective grant making, and policy development, we seek to influence the operating environment so that entrepreneurship in Africa can flourish.About the Kofi Annan Foundation.

The Kofi Annan Foundation works to promote better global governance and strengthen the capacities of people and countries to achieve a fairer, more secure world. To advance this mission, several initiatives have been developed in three focus areas: (i) Peace and Security; (ii) Sustainable Development; and (iii) Rule of Law and Human Rights.

About the John A. Kufuor Foundation

The John A. Kufuor Foundation is an independent, nonpolitical, nonpartisan and nonprofit institution dedicated to the promotion and sustainability of Africa's development. Founded in 2009 by H.E.

John Agyekum Kufuor, President of the Republic of Ghana (2001-2008), the Foundation is inspired by the former president's passion for practical and sustainable responses to the challenge of development in Africa. It aims to contribute to meeting the challenge by advancing effective leadership, good governance and socio-economic development.

About the Thabo Mbeki Foundation

The Thabo Mbeki Foundation is a non-profit organization created by former President Thabo Mbeki when he ended his service to the South African Government in 2008. The aim of the Foundation is to
support efforts aimed at promoting the achievement of Africa's Renaissance by setting the agenda for progressive change throughout the Continent.

Through this the foundation aims to create platforms for dialogue to promote the birth of a continental
Movement driven by a new cadre of thought leaders dedicated to Africa's political, social and economic renewal.

About the Olusegun Obasanjo Foundation