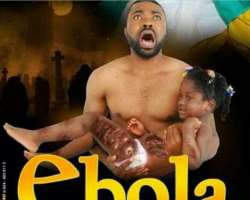 As Nollywood strives to position itself among the likes of Hollywood and Bollywood, producers still give fans lots of questions to ask on 'smust we joke with everything that happens to us or why do make-up that are not worth the story' and many questions alike.

With the recent outbreak of the Ebola virus, many would have expected that the issue could have died down a bit before Nollywood producers could settle down to write quality scripts to tell the story of the virus. But fans have been left asking questions like 'what is the meaning of this.'

While celebrated film maker, Tunde Kelani is currently shooting a short film aimed at raising awareness as regards the Ebola virus, recently, a movie is reportedly released into the Nigerian market with the title, 'Ebola, The Blood on African Soil' which was produced by Samuel Ofori.

What shocks many Nigerians is that, how will someone just wake up and prepare a sudden script about a sensitive issue just to make money out of it. Well, to many, it could be a hilarious movie and is this the right time for that?

The said movie which talks about the dreaded virus, with its poster shows a man carrying his daughter who is infected with the virus shouting. If truly this is how the Federal Ministry of Health warns people to treat infected persons, which means everybody would have contacted the virus.

If this movie is now on sale in the market, you would agree that this is just a clear show of shame in the make-believe industry of Nigeria.