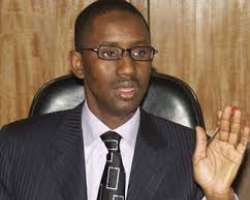 T here were strong indications yesterday that former Chairman of the Economic and Financial Crimes Commission (EFCC), Mallam Nuhu Ribadu, has concluded plans to defect to the Peoples Democratic Party (PDP) in spite of pressure to shelve such move.

A source in his campaign organisation said Ribadu might announce his final decision on or before Friday to lay all speculations to rest.

It was learnt that the initial plan was for Ribadu to defect on Thursday at a mini-rally in Yola, but he decided to hold more consultations following protests from some stakeholders in Adamawa PDP.

Ribadu was also said to be hurt by alleged blackmail by some of his rivals in PDP, who have drawn a battle line.

But some leaders of the state's All Progressives Congress (APC) have held last minutes meeting with Ribadu to plead with him to shelve the plan.

Another  reliable source said: “Barring any last minute hitch, Ribadu has concluded arrangements to defect to the ruling PDP on or before Friday to settle the controversy trailing his defection once and for all. Meetings to this effect were concluded last weekend.

“All I can tell you is that Ribadu will make his decision known to Nigerians. He is almost finalising last segment of consultations.

“The only thing disturbing Ribadu and his team is the increasing mudslinging and attacks on his person.”

Another source gave insights into the final stage of plans to bring Ribadu on board by some PDP leaders.

The source said: “In one of the meetings in Abuja, a PDP stakeholder from Adamawa Southern Senatorial District invited a couple of APC chairmen from Adamawa State, together with a handful of former members of the state Assembly during the tenure of former Governor Boni Haruna in the company of three members of the current PDP State Executive Council to a meeting with Ribadu himself in attendance.

“The stakeholder, who happens to come from the same local government with a top aide to Mr. President, informed the meeting that he was personally directed by Mr. President to invite them to the meeting and inform them that the defection of Ribadu to PDP had the full support of Mr. President.

“He said what they needed to do was to mobilise the ward delegates in readiness for the party primaries that would soon take place, especially given the fact that apart from those three members of the state PDP Executive Council that were at the meeting, all the others cannot be relied upon.

“He further told the meeting that Ribadu would be granted a waiver to contest the governorship whether the state chapter of the party liked it or not.”

Another source said: “A cabal is behind the coming of Ribadu and the way it is going about it, it cannot impose Ribadu on PDP in Adamawa. We know their game plan.

“From Kaduna, a very close ally and former minister in the early 80s brokered a meeting between Ribadu, who is his godson with Awwal Tukur, his nephew and son-in law on how to prosecute the Nuhu ticket.

“From all these and in spite of the stiff opposition from all other major stakeholders of PDP Adamawa, we wait to see how Ribadu can scale through and pick a ticket to run under PDP, a party he had a few months ago called assembly of rogues and a Federal Government  he had run down naked before the nation and international community in his report on the oil sector.”