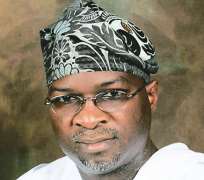 LAGOS STATE Governor Babatunde Raji Fashola, SAN, is wise. His antidote for piracy in Nigeria – a strategic constructive engagement with the “pirates” - is probably the most intelligent thing as yet from anyoneon piracy in Nigeria.

The record companies which ruled the Nigerian music industry between 1980s and 1990s distributed their products through local distribution networks which controlled the retail markets. Most of these record companies collapsed because they did not adopt new business strategies to meet technological changes of the time; from vinyl to cassettes and CDs. The skeletal music labels thereafter continued on the same risky path. Same applies to the home video industry (Nollywood) which started life as a result of business ingenuity of local distribution networks.

Piracy is fuelled by sheer technological opportunism with easy access to readily available electronic devices that can mass produce copies within minutes. We have “home taping pirates” who 'dub' music/videos to save themselves the cost of buying original copies, and “commercial pirates” whose business is illicitly mass producing copies of original products for distribution into retail outlets.

The Nigeria Film and Video Censors Board (NFVCB) recently reeled out a new distribution scheme based on registration of distributors. This is not pessimism: it took years of commitment and resources to create the existing local networks which extend to West Africa and other parts of Africa; so it iswishful thinking to expect the newly-licensed distributors to immediately establish national networks to dislodge them. The necessity of economic survival as rightly pointed out by Governor Fashola is the primary reason why those who earn their livelihood through the local networks will not go away in a hurry. Even so, what is NFVCB's guarantee that they too, sooner or later, will not get caught up in commercial piracy?

Anyway, why would music/video producers wait and hope that the Nigeria Copyright Commission and NFVCB will wield magic wands that will eradicate piracy? This kind of lackadaisical attitude and unprogressive expectation was the undoing of the record companies and the primary cause of Nollywood's plunge into recession in recent times. It is suicidal for producers to abandon their business caps and allow non-business-oriented government bodies to make crucial business decisions that would shape the future of the entertainment industry and the pockets of its practitioners.

Commercial piracy is fuelled by financial deficiencies in the market place rather than by anti-social behaviour. The most pronounced deficiency is producers not controlling or getting involved in the reproduction and release processes. And in situations where they do carry out the reproduction themselves, they hardly press enough products to meet market demands. Nigeria is a nation of 150 million people; therefore the release of fewer than 1.5 million cds or vcds, cannot meet market demand. The unmet demand is what commercial pirates meet with illegal copies that run into millions. This opportunism is definitely not unique to Nigeria; what is, is that producers are doing little or nothing strategic to redress the threatening situation. The time has come when music labels and home video producers must work collectively in seeking practical business solutions that will remove or at least reduce this market deficiency to the barest minimum. The good news is that encryption technologies that can restrict both home taping and commercial piracy are now available. When this is combined with carefully planned marketing strategies and value-added promotional incentives, it will spur on more consumers to buy original copies and errant local distributors/retailers would have to rethink their trade.. These are necessary fundamental business steps that have to be taken to woo interest and encourage the corporate banking and finance sector to invest in the entertainment industry.

The foregoing must be supported by other key strategies that will re-orientate and assimilate the local networks/retailers bringing them in as stakeholders and partners forming an important economic base of the entertainment industry. Similar strategies are known to be working successfully in Jamaica, a developing nation like ours, and the largest exporter of internationally acclaimed reggae music, where pirate distributors were offered a new deal and assimilated into the business. Interestingly, they are now the foot soldiers giving protection to music products within given territories. New legislations, tweaking the copyright laws to give more powers to NCC or NFVCB, or legal actions that unfortunately linger in court for years and resolve practically nothing in the market place at the end of the day are clearly not the business way forward for an ailing entertainment industry.

Music/video producers establish private infrastructure that will act as 24/7 vigilante/inspection bodies to protect their products and watch over them in the markets. Section 21 of the Copyright Act allows: “Notwithstanding the provisions of any law to the contrary, it shall be permissible for both criminal and civil actions to be taken simultaneously in respect of the same infringement under this Act.” Thus, while NCC handles criminal proceedings, affected producers can bring collective civil actions for financial restitution in addition to organising strategic marketing through private infrastructure. After all, producers earn nothing from criminal actions. The proposed infrastructure would act as a one-stop shop for all producers to bring civil actions, rather than piecemeal, and use that power to sanitise the markets.