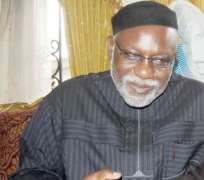 By Ifedayo Adebayo
March 25, 2010 03:50AM
The chairman of the Nigeria Bar Association, Rotimi Akeredolu, said that despite all the available evidence, it is a thing of concern that the Sokoto case, has still not been determined.

The Nigeria Bar Association has issued a strong warning to all legal practitioners involved in the 2007 Sokoto State election petition case, saying they should allow legally constituted courts to do their duty within their jurisdiction.

In a statement signed by the chairman of the Bar, Rotimi Akeredolu, the association said that despite all the available evidence, it is a thing of concern that the Sokoto case, which is at the Appeal Court, has still not been determined.

According to Mr. Akeredolu, “It is on record that the decision of the Tribunal was taken up at the Kaduna Division of the Court of Appeal and in an unanimous decision the Appeal Court found the PDP candidate not qualified to contest the said election but curiously went ahead to frame the final order in such a way as to allow the unqualified candidate to contest or participate in the 'fresh election.'

He however, condemned the newspaper publicised petitions filed by the respective parties against the Chief Justice of Nigeria and the Court of Appeal over the alleged positions they have taken on this matter.

Mr. Akeredolu said “these petitions were given ample publicity on the pages of national dailies, presumably by their authors. The Supreme Court, presided by His Lordship Dahiru Musdapher JSC (who had disqualified himself from participating in the hearing), granted an interim injunction restraining the Court of Appeal from further proceeding with the matter till the 1st of April 2010.”

But according to Mr. Akeredolu, “because this matter is sub judice in several aspects we shall in the best traditions of the legal profession, refrain from commenting on those facts that constitute issues yet to be resolved in the law courts.”

The Bar Association has however, resolved that “if the independence of the judiciary is to be sustained, then administrative agencies within the judiciary (no matter how powerful) must exercise the greatest restraint and caution not to interfere in the workings of the Courts.”

The statement then went on to “deprecates in the strongest terms the role of our colleagues (Legal Practitioners) in the propagation of petitions and the publication thereof in national dailies, ostensibly to protest the alleged misconduct of high judicial officers but apparently to stall the delivery of the judgment of the Court of Appeal.”

According to Mr. Akeredolu, these sorts of actions amount to “an unbridled interference in the judicial process so as to achieve personal objectives, which in this case includes the interest of their clients. This conduct is clearly unethical and unprofessional.”

He called on all parties in any dispute to ensure meaningful progress in the country's democracy by taking steps not only to obey the Constitution but to strictly adhere to its terms. This, he said, is especially important in cases of election petitions.